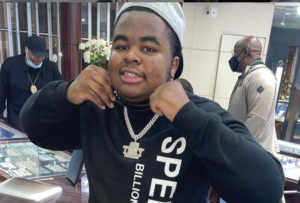 The 15-year-old is the owner of SPERGO,  a lifestyle clothing brand focused on inspiring individuals to keep going and follow their dreams. At only 12 years old, Trey wanted to find a way to help kids stay out of trouble and create a better life. He used his some of his birthday money to invest in his first batch of empowerment T-shirts. He sold out within seven days, igniting a fire within him to create an entire clothing brand.

Trey has sold over 30,000 units of merchandise since launching the brand in 2018, according to the company website. He has grossed more than $200,000 in sales for several months in a row. Many celebrities have sported the SPERGO brand including Shaquille O’Neil, Sean Combs, and Meek Mill.

Trey has often shared that being a teen entrepreneur has come with pros and cons. “Some people don’t take me seriously,” Trey told Philly Mag during an interview in 2019. “They kind of look over me when it comes to business deals or opportunities that they give to older people. But I let my work speak for me in those cases.”

He adds, “In the beginning, a lot of my friends laughed at me, but I always empowered myself. I would always tell myself that I am powerful, I am strong, I am amazing. They always laughed at me for that, but now they all want to do it, too. A lot of people counted me out, but I make sure I always get a seat at the table.”

Trey’s persistence has paid off. Earlier this year, he landed a deal with the Philadelphia 76ers. He’s part of the ‘Buy Black Program’, an initiative focused on scaling local black-owned businesses.

“I started SPERGO three years ago, and I would never have imagined that I would be officially stamped a 76ers partner by my home basketball team,” Trey said about the partnership,  Baller Alert reported.

Trey is enjoying consistent wins this year but it wasn’t always like that. He’s heard plenty of no’s, laughs, and people who didn’t believe in the vision. But Trey was determined to keep going and execute his vision.

“I don’t really get discouraged because I feel that “no” means next opportunity,” Trey told Philly Mag. “I believe that if I continue working hard the next opportunity is on the way.”

2021 Met Gala: See the Celebrities Who Slayed & Ones Who Missed the Mark

‘RHOA’: Porsha Williams Says She Was Homeless While Starring On The Show