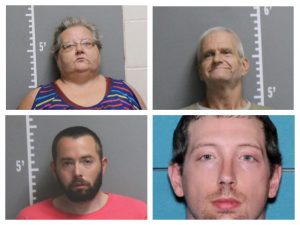 After finding the body of a Black man burned in a ditch in Iowa, authorities have arrested three white men and one white woman in connection with the death.

The victim, 44-year-old Michael Williams of Grinnell, Iowa, was identified through scientific methods by the Office the State Medical Examiner, and the DCI Criminalistics Laboratory. Although the people accused of the crime are white and the victim was Black, authorities are not labeling the killing a hate crime.

According to a press release by the Iowa Division of Criminal Investigation, the Grinnell Police Department, and the Jasper County Sheriff’s Office, on Sept. 22, law enforcement officers arrested the following individuals in conjunction with the crime: Steven Vogel, 31, of Grinnell. Vogel has been charged with one count of murder in the first degree, a class A felony, and abuse of a corpse (a Class D felony). Vogel was already in custody at the Marshall County Jail on unrelated charges.

Details on why the man was killed have not been determined but based on evidence and statements gathered during the investigation, Williams and Vogel were known acquaintances who often socialized within the same circle of friends.

The investigation revealed that Williams was killed on or about Sept. 12. His body was then wrapped in cloth and plastic, which was secured with rope and tape, then taken to rural Kellogg on Sept. 16, where the body was set on fire.

On Sept. 18, the Office of the State Medical Examiner classified Williams’ death as a homicide and his cause of death as consistent with strangulation.