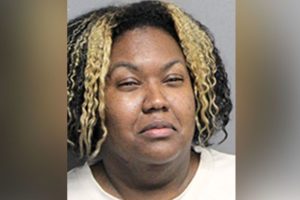 A Louisiana woman who worked as a 911 dispatcher was fired from her job and arrested on Wednesday, April 7, after she refused to return the $1.2 million that Charles Schwab & Co. mistakenly deposited into her brokerage account, Nola.com reports.

33-year-old Kelyn Spadoni was terminated from her job with the Jefferson Parish Sheriff’s Office after being charged with theft valued at over $25,000, bank fraud, and illegal transmission of monetary funds, Capt. Jason Rivarde said. Spadoni is not only accused of keeping the money, but transferring some of the funds over into another account and purchasing a new car and house with the stolen funds.

“It’s not her money,” Rivarde said. “She has no legal claim to that money. Even if it was put in there by mistake. It was an accounting error.”

Charles Schwab & Co. also launched a lawsuit against Spadoni in federal court on Tuesday over claims Spadoni ignored their countless attempts to contact her and recover the money. The lawsuit, filed in the U.S. District Court in New Orleans, says Spadoni opened an account with Schwab in January and had an “enhancement” added to her account one month later. Schwab meant to transfer $82.56 into Spadoni’s Fidelity Brokerage Services account. But, instead, transferred $1,205,619. Staffers attempts to reverse the transfer were unsuccessful.

They instead received a “CASH NOT AVAILABLE” message after Spadoni quickly removed the funds from the account. “She secreted it, and they were not able to access it,” Rivarde said. “By her conduct, Spadoni has made it clear she does not intend to return the mistakenly transferred funds to Schwab,” the lawsuit states.

Detectives and Schwab have since been able to recover about 75% of the mistakenly transferred money. Spadoni is accused of purchasing a new house and a 2021 Hyundai Genesis sport utility vehicle worth $48,000. “If someone accidentally puts an extra zero on a utility payment, they would want that money returned or credited to them,” Rivarde said. “This is no different.”

On Thursday, Spadoni was being held at the Jefferson Parish Correctional Center in Gretna on a $50,000 bond, court records show.

Tank On Losing His Hearing: “It Hasn’t Given Me Reason To Give Up”

Here’s Why Whoopi Goldberg Fell Asleep On ‘The View’