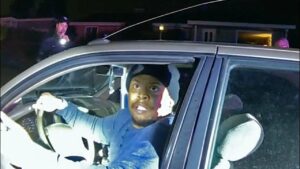 A Washington sheriff made false claims against a Black man newspaper carrier, alleging that the man threatened his life and was attempting to break into his home, according to KING 5 News.

Sedrick Altheimer filed a federal lawsuit in King County Superior Court that transferred to U.S. District Court against Pierce County for violating his constitutional rights by Sheriff Ed Troyer Jr. on the night of January 27, 2021. Troyer called for reinforcement, and over 40 officers appeared at the scene based on the claims the sheriff’s life was in jeopardy, The Seattle Times reports.

Although Altheimer was not arrested, police subjected him to questioning and frisking. The lawsuit accuses Troyer of alleged aggression due to “racial animus” and “reckless disregard for Mr. Altheimer’s civil rights.”

“Mr. Altheimer has had to make life changing alterations to both his work and his personal life because of the trauma he faced as a result of the stalking and the police detention caused by Sheriff Troyer’s false accusations,” says the lawsuit, The Seattle Times reports.

“It’s just not the same,” Altheimer says in an interview with KING 5 why he remains in his car when he delivers newspapers, especially near Troyer’s home where he usually takes a detour. “Every time you drive in that neighborhood you look at that one spot and you’re like, man, I almost lost my life.”

Altheimer alleges on that night, he saw headlights in his rearview mirror and observed a white SUV trailing him on Vista View Drive. Altheimer stopped his car and approached the vehicle around 2:00 a.m., according to police reports.

“I asked him three questions that night: Are you a cop? Are you following me? And is it because I’m Black?”

Altheimer claims that Troyer never identified himself as a police officer. However, Troyer called for reinforcement and told the 911 dispatcher that Altheimer threatened his life four times.

When Troyer retracted his accusations about Altheimer’s threats, the state attorney general’s office charged him with a misdemeanor for false reporting and making a false statement to a civil servant, according to The Seattle Times.

“It’s racism,” said Sargent to the news station. “I mean, it’s just a system of racism. That this man, the sheriff, the head of one of the largest organizations of police officers in our state could call and say no less than three times that his life had been threatened is unfathomable.”

Many are demanding Troyer resign from his position as sheriff, and the state Attorney General’s Officer started a criminal investigation to look into false-reporting charges.

Troyer denies any wrongdoing and is willing to cooperate with impending investigations.

Altheimer has been an employee of Steiner Distribution since 2015 “and is considered a reliable and hard worker,” reads the tort claim that also states he is the primary provider for his five children “and works hard to fulfill his obligations.”