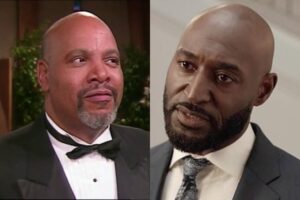 Adrian Holmes is set to reimagine the role of Uncle Phil in the upcoming The Fresh Prince of Bel-Air reboot and plans to pay tribute to the late James Avery.

“You can’t step into his shoes,” Holmes told “Today.” “I’m just kind of creating my own. For me, it’s a tribute to him, a way of saying thank you to him and what he did for us.”

Avery died in 2013 at the age of 68 following complications from open-heart surgery. During The Fresh Prince reunion in 2020, the original cast paid homage to Avery by spotlighting the fatherly role he took on on and offscreen while sharing clips from his memorable moments on the show.

While the original sitcom took a lighthearted approach to tackle issues related to growing up in the ’90s, the reboot takes a more serious tone while addressing more hard-hitting issues.

For example, the role of Carlton, originally played by actor Alfonso Ribeiro, was known for his signature snap dance and sweater vests. But the reboot version has actor Olly Sholotan taking on the role while grappling with race and identity.

“I mean, I would say that honestly every aspirational Black person has dealt with that on some level, ‘Oh you talk white,’ or, ‘You act white.’ And I think as a community, we’ve never really asked ourselves, like, what are we saying when we make comments like that, how does that affect people and their development?” Sholotan said.

Jabari Banks is taking on the lead role of Will and says the reboot will give fans a much deeper perspective of the show’s original characters.

“It’s like the idea if you took all of the characters from The Fresh Prince, but you dove into each one of their journals,” Banks said. “And you got to see, like, the inside life of these characters that we all know and love.”