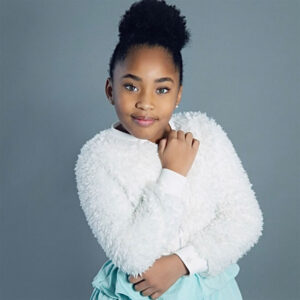 The record-breaking achievement came after the star vocalist shined in eight professional performances in 2019 at the Pittsburgh Public Theatre’s Lights and Legends show. But that’s not all. Brinker impresses many with her vocal range and ability to sing in seven different languages.

In 2021, the young vocalist marked another unique feat by becoming the first-ever America’s Got Talent contestant to receive a unanimous Golden Buzzer from all four judges during her performance of “Juliet’s Waltz.” She went on to succeed as a finalist and later released her debut holiday album, The Wonder of Christmas, BLACK ENTERPRISE previously reported.

Raised in Latrobe, Pennsylvania, Victory was adopted by Christine and Eric Brinker. She grew up with six brothers and four sisters and loved being part of a big family. For Victory, her success wasn’t hers alone. Her siblings have been with her on every step of the journey. She even brought some of her siblings to be featured alongside her in her “Silent Night” music video.

“I was an early talker and started singing at age two. Between age two and three, I was memorizing entire CDs with good pitch. I was always singing,” Brinker said, according to Guinness.

Brinker remains dedicated to achieving the perfect pitch. She meets with her vocal coach once or twice a week and learns new songs and languages.

“I would like to try to break the record for highest vocal note by a child…or maybe even an adult!” Brinker continues.

In addition to her piano and singing talents, Brinker is pursuing acting and more Guinness World Record titles. She hopes that her achievements will ignite more kids to pursue their aspirations and dreams.

“I tell myself to give it my all and have fun, and I do!”