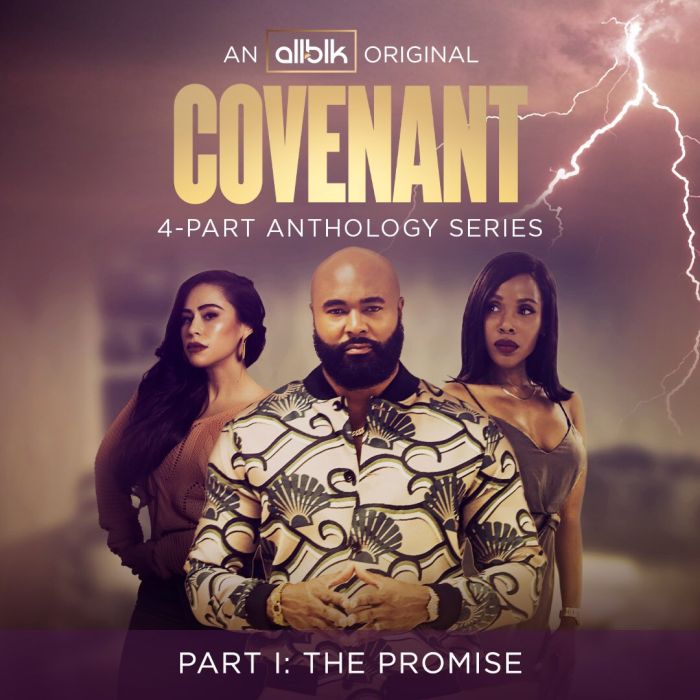 COVENANT details characters and stories of the bible as they’re thrust into a vicious dystopia of present-day, real-life situations. Each episode reimagines a classic Bible story as it would take place in the modern world, “inviting viewers to examine how sacred lessons of faith and love fit into today’s society.” Additionally, each story is told in 2-parts spanning 8 weeks total.

Today viewers will delve deeper into the world of “The Promise.”

Starring creator Kaye Singleton, COVENANT’ “The Promise” – tells the story of a desperate middle-aged woman who’s fallen into early menopause and risks her marriage to give her husband the child she can no longer conceive.

During episode 2 which is available today Thursday, October 21 on ALLBLK, Hannah is ready to give birth, and while in the delivery room she requests pain killers for the contractions. Unfortunately for her, she’s shut down and made to endure a natural delivery.

Take an exclusive look below.

The 2nd episode of COVENANT’S debut story “The Promise” is available on ALLBLK.

Created by Kaye Singleton (Saints & Sinners, American Soul), Covenant will draw audiences into a world of thrilling, suspenseful drama where characters and stories of the bible are thrust into a vicious dystopia of present-day, real-life situations. The four-part anthology series will tell four remarkable tales of betrayal, love, revenge, and redemption – challenging viewers to examine how these sacred lessons of faith fit into today’s society. Each story will be told in 2-parts (8 weeks total) debuting exclusively on popular AMC Networks’ streamer ALLBLK (www.ALLBLK.tv), on Thursday, October 14th.

Written and Starring Singleton, Covenant’s debut episode – “The Promise” part 1 and part 2– will tell the story of a desperate middle-aged woman who’s fallen into early menopause and risks her marriage to give her husband the child she can no longer conceive.

Subsequent episodes include “The Vow,” – A man who must hide his extraordinary abilities to fulfill his life’s destiny to save his people. A destiny his rebellious, arrogant nature nearly destroys; featuring Palmer Williams Jr (Tyler Perry’s House of Payne, Love Thy Neighbor) and Rico Ball (CW’s Black Lightening). “The Retribution,” – A devoted husband and family man wakes up from his coma and immediately seeks to avenge his wife’s honor after he learns she was violated by someone he trusted; featuring Phaedra Parks (Real Housewives of Atlanta) and Jay Hunter (Tyler Perry’s If Loving You Is Wrong, Max Payne). Concluding with “The Enemy,” – A deeply religious, controversial lawmaker known for his ruthlessly aggressive tactics risks his life, reputation, and career, when he shockingly attempts to join and champion for the very community he tried to destroy. Featuring Kron Moore (Tyler Perry’s The Oval).

What Vanessa Nygaard’s coaching hire means for the Phoenix Mercury