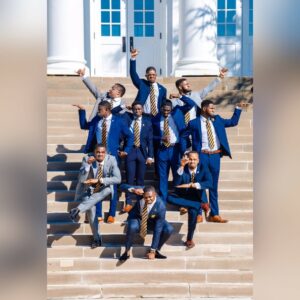 As the first Black fraternity, it’s only right that Alpha Phi Alpha Fraternity, Inc. get a monument in its honor at the organization’s birthplace.

On Thursday, Cornell University announced the fraternity had acquired two properties in Ithaca, New York, one of which is its birthplace. Located at 411 E. State St, it’s where seven Black Cornell students first assembled to found the nation’s first Black Greek-lettered organization, Alpha Phi Alpha, in 1906.

The second property, located at 105 Westbourne Lane, was purchased in Sept. 2021 for $1.5 million, will become the fraternity’s first frat house owned by Alpha Phi Alpha in Ithaca.

“The memorial will realize an aspiration of our founding members, who dreamed of having a monument to the beginning of Black Greek letter fraternities and sororities in Ithaca, which will hopefully center attention around the reason why we were founded when we couldn’t be members in mainstream society,” said Ernest Eric Elmore ’86, J.D. ‘89, an antitrust attorney at the Federal Trade Commission in Washington, D.C. and former president of the Alpha Chapter Alumni Association.

The fraternity was founded at a time when Cornell was one of the few major universities to accept Black students but still wouldn’t allow them to live on campus. Instead, Black students took lodging with nearby Black residents.

It was in one of these houses, on State Street, where Alpha’s seven founders changed history. Since the fraternity’s inception, it has expanded to include 900 chapters across the country and includes renowned alumni members like Martin Luther King, Jr., W.E.B. Dubois, Duke Ellington,and Thurgood Marshall.

“As African Americans in the age of social segregation in the early 1900s, they felt it was important to come together and support one another and navigate Cornell and Ithaca, so a number of members of that study group wanted to become a fraternity,” Elmore said.

The monument will be celebrated during a fundraising weekend from May 13-15.