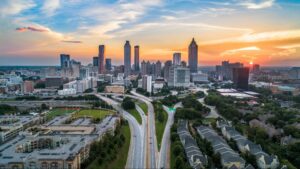 Major tech companies are flocking to Atlanta to grab up the city’s diverse tech workers in what is quickly becoming an “arms race” for IT talent.

Apple, Google parent, Alphabet, and Microsoft have all opened offices in the Peach State’s capital city in recent years. Additionally, CNBC reports that Visa is opening a new Atlanta office this year, where its chief diversity office will build relationships with startup companies and diverse tech workers.

According to a CBRE 2021 report, Atlanta is the eighth-best city for sourcing tech talent. Additionally, Morehouse College, Spelman College, and Clark Atlanta University are all based in the city and have partnerships with tech companies. Even HBCUs outside Atlanta are partnering with tech companies.

Not only does Atlanta have the IT talent and educational partnerships, but the Peach State is also emerging as a hot spot for cryptocurrency and bitcoin mining.

Fortune reports Georgia is attracting crypto miners due to its relatively low power prices and large amounts of nuclear and solar power, which allows mining companies to call them sustainable or emissions-free. Regulators in the state have also been friendly to miners, pushing the industry toward solar programs that enable companies to offset their emissions.

“At the end of the day, Georgia wants this business here,” Matt Schultz, CleanSpark’s executive chairman, told Fortune. “They’ve done everything in their power to grow Bitcoin in the state.”

Atlanta is also home to several tech incubators and innovation centers, including the Atlanta Tech Village, Atlanta Tech Park, and the Propel Center.

More than a dozen companies that were started or based in Atlanta have hit the threshold for unicorn status, meaning their valuations have reached over $1 billion, including Bakkt, Kabbage, which was purchased by American Express last year, and Calendly.