The U.S. Capitol‘s “safe room” where members of Congress sought refuge during last week’s attempted coup has emerged as a potential coronavirus superspreader. But that wasn’t the reason why Massachusetts Rep. Ayanna Pressley decided against going there.

The second-term member of “The Squad“ said in a tweet on Tuesday that her decision against hiding in the “safe room” was predicated on her opinion that her Congressional colleagues may be just as dangerous as the riotous mob that illegally and violently broke into the Capitol on Jan. 6.

“The second I realized our ‘safe room’ from the violent white supremacist mob included treasonous, white supremacist, anti masker Members of Congress who incited the mob in the first place, I exited,” Pressley tweeted. “Furious that more of my colleagues by the day are testing positive.”

The second I realized our “safe room” from the violent white supremacist mob included treasonous, white supremacist, anti masker Members of Congress who incited the mob in the first place, I exited. Furious that more of my colleagues by the day are testing positive.

That last part was a nod to Washington Rep. Pramila Jayapal being the latest Congress member to test positive for COVID-19 after being in the “safe room.” Reps Bonnie Watson Coleman and Brad Schneider also contracted the coronavirus under the same circumstances. All three are Democrats.

Meanwhile, a viral video from inside the “safe room” showed Republicans repeatedly turning down offers from Democratic Rep. Lisa Blunt Rochester, a Black woman, who was distributing masks.

The Washington Post later quoted Pressley as having said that “we’re not going to survive a terrorist attack to be exposed to a deadly virus.”

Sarah Groh, Pressley’s chief of staff, told the Boston Globe about the harrowing ordeal for the Congresswoman and her staff. She described a scenario that suggested Pressley’s office had been sabotaged.

“Every panic button in my office had been torn out — the whole unit,” Groh said, underscoring the horror being experienced as the staff moved to barricade the office door with furniture and jugs of water. Groh said she had used the button before and was unsure why it was removed, giving her and Pressley pause on knowing whether they could truly trust the Capitol Police.

New York Rep. Alexandria Ocasio-Cortez, (AOC) Pressley’s fellow member of “The Squad,” expressed a similarly horrific sentiment and said she thought she was “going to die” during the riot.

“I can tell you that I had a very close encounter where I thought I was going to die,” AOC said during an Instagram Live session Tuesday night. “I did not know if I was going to make it to the end of that day alive.”

The responses from Pressley and AOC underscore the concerns that at least a portion of the Capitol Police could have been in cahoots with the far-right extremists and conspiracy theorists who stormed the Capitol under the false and baseless pretense being proliferated by Trump that the 2020 election results were fraudulent.

Multiple officers with the Capitol Police have been suspended and at least a dozen others were being investigated for their roles in the attempted coup. Local and federal officials warned of violence — the FBI warned of “war” — before Trump’s supporters initiated the violence that, in theory, the Capitol Police should have been prepared for.

Instead, there is video and photo evidence of Capitol Police officers all but aiding and abetting the rioters, any of whom harbor the same racist and white supremacist ideals that Pressley cited as a reason for her not going to the so-called “safe room.”

To be sure, not all of the Capitol Police Department has eggs on its face. Officer Eugene Goodman is being hailed as a hero for exhibiting self-restraint and not using weapons against the Capitol coup mob that he diverted away from the Senate floor. And Officer Brian Sicknick was attacked by the supposed pro-police mob, which “bludgeoned” him with a fire extinguisher, causing his death hours later.

It is apparent that they were exceptions to what is seemingly being exposed as a rule for the Capitol Police. 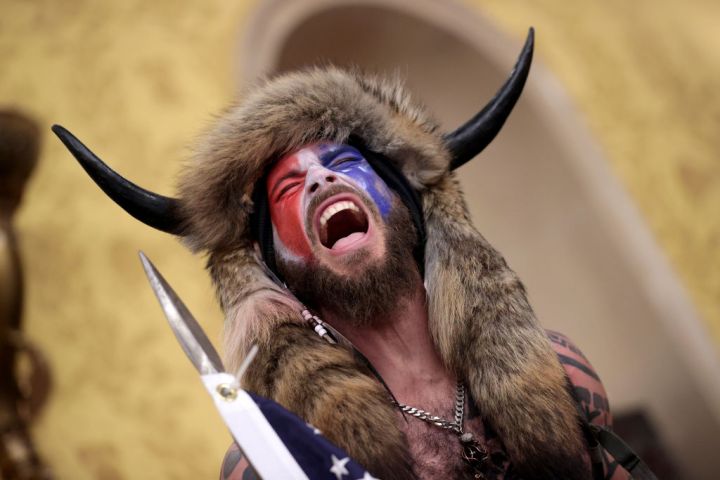 Meltdowns And Arrests: Violent White People Shocked At Being Held Accountable Over Attack On Capitol Hill

BREAKING: Aaron Mostofsky, the son of a NY Supreme Court judge was arrested in Midwood Brooklyn on Tuesday morning for his alleged involvement in the Capitol riot. pic.twitter.com/MweFpdvLkX

From his feet on Nancy Pelosi’s desk to an Arkansas jail. Here’s a mug shot of Richard Barnett, who was arrested this morning and is now facing federal charges pic.twitter.com/rpSJ3BvyAm

Adam Johnson, 36, was taken into custody and held on a warrant. Online records indicate he was held without bail.https://t.co/IrLBr0g96N

Here’s the scary moment when protesters initially got into the building from the first floor and made their way outside Senate chamber. pic.twitter.com/CfVIBsgywK

NEW: West Virginia lawmaker Derrick Evans, who livestreamed himself entering the U.S. Capitol, has been hit with criminal charges pic.twitter.com/Ez7yY2kjoF