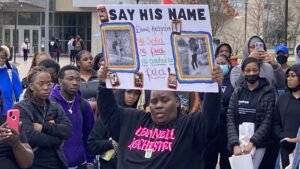 Disclosure: This post involves mention of murder and police brutality.

Two Baltimore police officers are currently under investigation by the Maryland Attorney General’s Office for their involvement in the killing of 18-year-old Donnell Rochester on Feb. 19.

The two officers who shot and killed Rochester, Connor Murray and Robert Mauri, are on administrative leave pending the investigation, per the Huffington Post.

As previously reported, Rochester was gunned down as he attempted to flee in his car before Baltimore PD handcuffed the unarmed teenager as he bled out. He succumbed to his injuries at a nearby hospital soon after.

Rochester was attempting to evade police due to a warrant for failure to appear in court for a car theft charge. Bodycam footage reveals he and a female passenger begin to take off running on foot after being spotted by the cops. Rochester doubles back to the car to try to get away and becomes surrounded by three officers with their guns drawn, yelling at him to comply with their demands. As the teen slowly moves the vehicle forward and without striking any of the officers, Murray, who was front and center, begins shooting. Mauri also fires his weapon at the moving car. Rochester crashes into a parked vehicle and surrenders only seconds later, calling for help after being shot.

“You OK?” an officer can be heard asking Murray at the scene. He replies, “Yeah.” Another asks Murray if he got hit.

However, in a Feb. 22 request for a search and seizure warrant for Rochester’s car, the officers wrote the probable cause for searching the vehicle was due to the teen striking the officer with the car, citing first-degree attempted murder. Nothing came of the warrant except fragments from the shooting and plastic tubes of “suspected” marijuana.

“It looks like the police were looking for any means to cover or mitigate what had happened,” said Malcolm Ruff, an attorney representing Rochester’s family. “He was a scared 18-year-old kid who was trying to get away and get out of a bad situation. He got scared; he tried to get away. He did not try to run that police officer over.”

Rochester’s mother, Danielle Brown, has been vocal in her demand for justice in the months following her son’s death.

“We just want answers, and [to] let the world know that Donnell should still be here. We are going to be his voice since he can’t. My son did not deserve what happened to him, for his life to be taken away.”