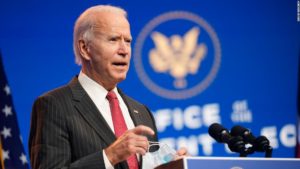 Reuters – The White House Council on Environmental Quality expects to submit a plan for helping clean up the nation’s most polluted communities to President Joe Biden within weeks, according to the council’s new chair, Brenda Mallory.

The widely anticipated blueprint is intended to help Biden execute a campaign promise to ensure 40% of federal clean energy investment benefits flow to disadvantaged communities, and should be ready by the end of May, she said.

The council also expects to launch a data mapping tool around that time to help identify those communities, Mallory said.

“It’s a work in progress,” Mallory told Reuters in an interview this week about the effort.

A Biden executive order on Jan. 27 had set a 120-day deadline for the plan.

Biden has promised to direct trillions of dollars toward a sweeping goal of decarbonizing the nation’s economy by 2050, a strategy aimed at fighting global climate change while also reducing pollution from big emitters like oil refineries and fossil fuel-fired power plants. He says the switch to clean energy can create jobs and improve the economy, countering concerns among Republicans that it will slow growth.

The CEO has already taken steps to undo and revise Trump-era policies that aimed to fast-track big energy and manufacturing projects by shortening permit timelines, narrowing the window for community input and reducing the emphasis on weighing a project’s climate impacts.

Mallory said Biden has “significantly elevated” the CEQ’s focus on environmental justice and that companies planning large projects should expect more scrutiny during permitting under the new administration.

“First of all you want to be doing the assessment of what are the impacts that you’re causing and what can you do about it before you are even having a conversation with the government,” she said.

Mallory also said the CEQ is working to detail how the federal government will reduce the greenhouse gas emissions of its own operations, like buildings and vehicle fleets.

In 2019, the federal government emitted nearly 75 million metric tonnes of carbon dioxide equivalent, just over 1% of the national total.

Who will succeed Khabib as king of the lightweights?