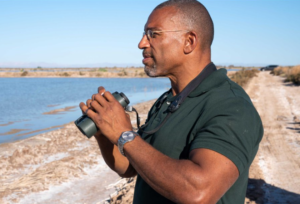 The Black bird-watcher who went viral in 2020 after he was targeted by a white woman who accused him of threatening he is bouncing back with his own television show.

On Thursday, National Geographic announced Christian Cooper as the host of a new series called Extraordinary Birder, NPR reported. In the series, Cooper takes viewers into the “wild, wonderful, and unpredictable world of birds.”

“Whether braving stormy seas in Alaska for puffins, trekking into rainforests in Puerto Rico for parrots, or scaling a bridge in Manhattan for a peregrine falcon, he does whatever it takes to learn about these extraordinary feathered creatures and show us the remarkable world in the sky above,” the network said in a statement.

Cooper gushed over the opportunity. He has been watching birds since he was 10.

“I love spreading the gospel of birding,” Cooper told the New york Times.

Lifelong birder Christian Cooper (@blackburniannyc) will take us into the wild, wonderful and unpredictable world of birds in his new show, The Extraordinary Birder. pic.twitter.com/2ZwTlZ3JmN

Cooper was falsely accused of threatening a white woman who has since been dubbed “Central Park Karen.” The woman, Amy Cooper (no relation), was walking her dog in New York’s Central Park and witnessed Cooper bird watching.

Christian Cooper filmed the encounter that showed Amy Cooper calling the cops and falsely accusing him of harassing her.

“I’m in the Ramble. And there is a man, African American—he has a bicycle helmet. He’s recording me and threatening me and my dog.”

When later asked why he chose to record the incident, Cooper noted the irony while highlighting his natural passion for birds.

“Well, that’s a little bit of the irony, it had nothing to do with race,” Christian told CBS Mornings Gayle King.

“It was just a conflict between a dog-walker and a birder.”

Amy Cooper ended up having to temporarily surrender her dog and was fired from her job shortly after the incident, CBS reported. She was also charged with a misdemeanor that was later dismissed.