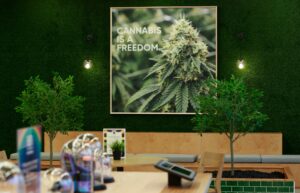 Black people have long been the targets of the war on drugs, but as the cannabis market is becoming in more states, Black cannabis entrepreneurs are being left behind.

According to Leafly’s Jobs Report 2021, the legal cannabis industry supports more than 321,000 full-time jobs; Black cannabis entrepreneurs make up less than 2% of the nation’s cannabis.

Even in states that have equity and inclusion programs as part of their cannabis framework and programs specifically designed to assist entrepreneurs from marginalized communities, Black cannabis entrepreneurs are still struggling to establish a footprint in the industry.

Massachusetts was the first state to establish diversity, equity and inclusion (DEI) efforts in its cannabis framework. However, in 2020 just 11 cannabis licenses went to the 143 participants of the state’s social equity program. According to the Massachusetts Cannabis Control Commission, in 2021, 73 percent of active executives, owners, employees, and volunteers of cannabis establishments were white and 64 percent were male.

New Jersey, which also has a DEI framework, began the sale of legal cannabis at 13 locations in the state on April 21. However, according to Ami Kachalia of the New Jersey ACLU, none of those locations that sold cannabis on the first day were Black-owned but instead are largely multi-state operators.

“There were a few existing medical marijuana alternative treatment centers (dispensaries) here in New Jersey that were approved to start selling cannabis those cannabis businesses are several multi-state operators and at the moment none of them are black-owned businesses,” Ami Kachalia of the New Jersey  ACLU said in a statement to BLACK ENTERPRISE. “What I will say is most of those businesses predate when New Jersey legalized cannabis and now there’s a new cannabis Regulatory Commission that’s responsible for governing the industry, the licenses and all of the regulations and they have recently added several conditional licenses for cannabis businesses that have a much more diverse pool that includes minorities, women, disabled veterans and people with prior records for marijuana-related charges.”

In addition to the issues surrounding getting a license, one of the main reasons Black cannabis entrepreneurs are struggling to start their businesses is the same reason Black entrepreneurs in any industry struggle.

“One of the reasons I think we see Black ownership decreasing over time has to do with regulatory requirements and access to capital,” Perry Salzhauer, founding partner of the Green Light Law Group, told Fortune.

Many of the social equity programs drafted by states do not assist Black and minority entrepreneurs with the financial side of the business or the associated costs with starting a legal cannabis operation. Blaze reports that it can cost $250,000 upfront to start a legal cannabis business as just the rent for a cannabis warehouse can cost six figures per year and often carry multi-year leases.

“When it comes to building equity in a cannabis industry both here in New Jersey and across the country it has to be built into the industry from the very start and there has to be a comprehensive and robust plan to achieve equity,” Kachalia added. “That’s not only talking about prioritizing the inclusion of people with prior records minorities and disabled veterans but also providing the kind of financial resources and access to Capital which we know is a huge barrier to entry as well as technical assistance so that people can start and grow their business and be successful.”

Some states have considered financial assistance when setting up their cannabis framework. In Ohio, it is a legal requirement that 15 percent of the state’s medical cannabis licenses must be awarded to a person identifying as Hispanic, Asian, Native American, or African American.