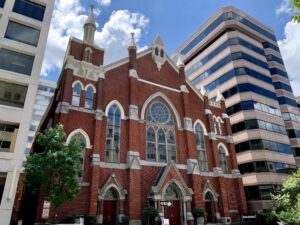 During the COVID-19 pandemic, Black churches became a trusted resource for disseminating information on where and when to get tested, vaccinated, and dispelling inaccurate information on the virus. However, Black churches have been closing for myriad reasons, including aging congregations that younger members aren’t replacing.

Additionally, the gentrification of urban areas across the country is leading to the end of low-income minority neighborhoods, where the local church acts as everything from a day-care center to a food pantry.

The Brookings Institute analyzed church closures in New York City between 2013 and 2019 and found the highest rates of church closures were in areas with the highest percentage of Black people. Many of these areas included churches that participated in the state COVID-19 testing program.

Brookings’ analysis also revealed that a greater rate of church closings happened in areas with higher COVID-19 positivity test rates. Church closings affect the most vulnerable groups, including the elderly, immigrants, low income, and the unstably housed, forcing them to travel long distances to obtain the health and community services they need.

To protect vulnerable populations and their faith-based centers, politicians, public health officials, and racial equity organizations must work together to install public policies that prioritize cultural institutions paramount to people of color. Churches are central to public health efforts and outreach. Everyone needs to pay attention to the loss of Black and minority churches and work together to ensure churches stay open and continue serving the community.