Although Robinson will forever be known for his contributions to the game, he was so much more than a baseball player. The Georgia native was a four-sport star at UCLA, a World War II US Army veteran, and Negro League player. He was also the first African American named a vice president at a Fortune 500 company, a political adviser, a banker, a real estate developer.

After Robinson returned home from the war in 1944, he began playing for the Kansas City Monarchs of the Negro Leagues. A year later, Brooklyn Dodgers owner Branch Rickey tapped Robinson as the player who would integrate Major League Baseball.

Rickey saw more than Robinson’s talent on the field but also his demeanor, knowing the abuse he would receive from white fans on the field and off. Robinson’s Major League journey began with the Montreal Royals, the Dodgers’ top Minor League team. Robinson led the International League in batting with a .349 average and 40 steals. That earned him a call up to the Dodgers the next year and Robinson made his Major League debut on April 15, 1947, playing first base.

“It was the most eagerly anticipated debut in the annals of the National Pastime,” authors Robert Lipsyte and Pete Levine wrote, according to The Baseball Hall of Fame. “It represented both the dream and the fear of equal opportunity, and it would change forever the complexion of the game and the attitudes of Americans.”

Robinson became an immediate star, winning the inaugural Baseball Writers’ Association of America’s Rookie of the Year Award. Two years later, he was named the National League’s Most Valuable Player batting .342 with 16 home runs, 124 runs batted in and 37 stolen bases. Robinson made seven All-Star games in his career and in 1955, made one of the greatest plays ever—stealing home plate in game one of the 1955 World Series. The Dodgers won the series in seven games and won six National League titles during his nine seasons with the team.

The next season Robinson helped the Dodgers get back to the World Series, but they lost in seven games as he struck out to make the last out of the series. During the off-season, Robinson was traded to the New York Giants, but the shortstop already made up his mind to retire as the effects of diabetes begin to take a larger toll on him.

Robinson ended his career with a .311 batting average, 137 home runs, 734 runs batted in, and 197 stolen bases. In 1962 Robinson became the first African American to be elected into the National Baseball Hall of Fame.

The UCLA alum spent his post-playing days as an entrepreneur, owning a construction company, a car dealership, and an activist, using his fame to fight for civil rights. 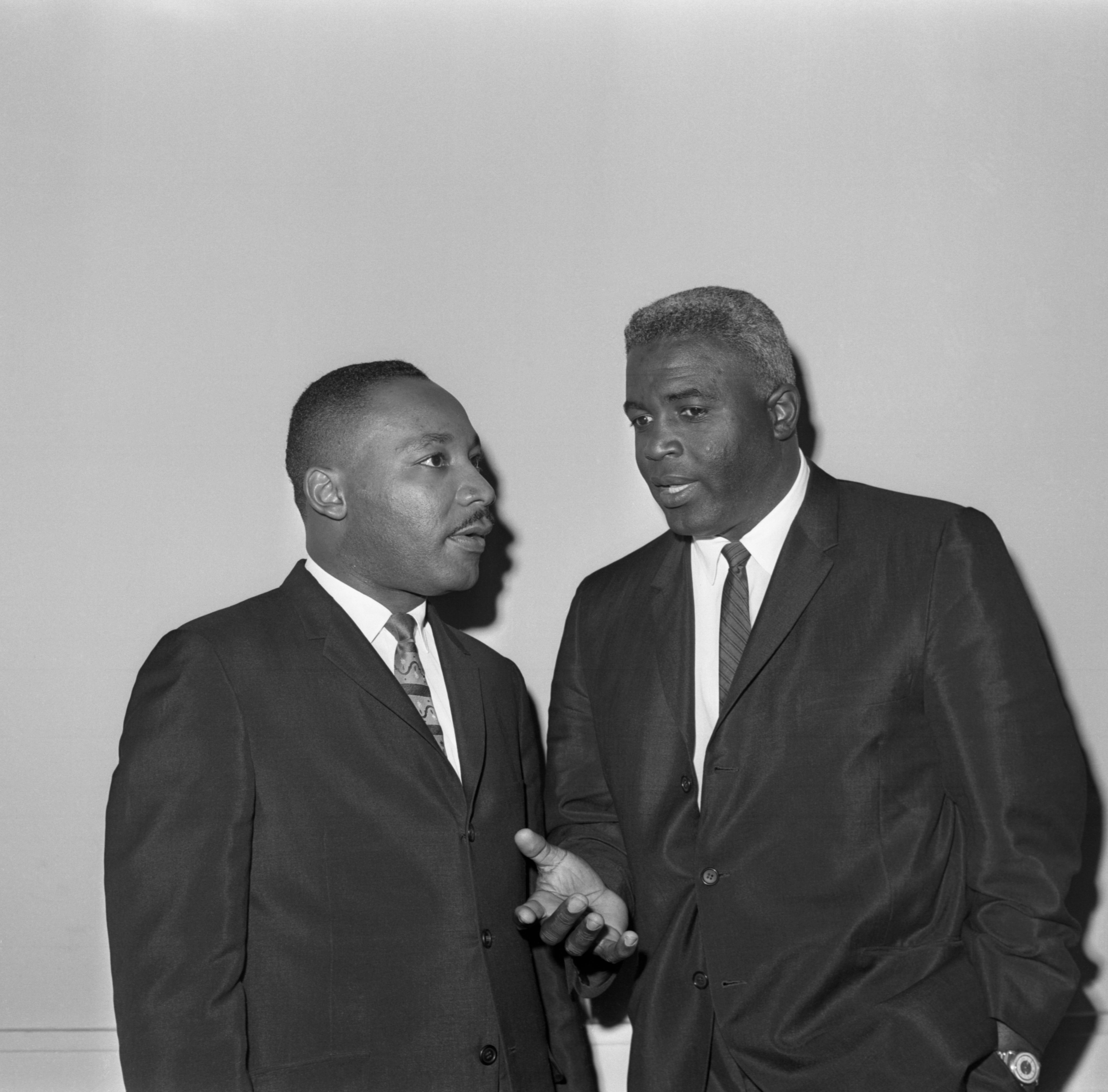 The former shortstop also set records, becoming the first African American to be named a vice president of a major American company when he was named vice president for Personnel at Chock Full O’Nuts. One of the main things he did was improve the working conditions for those at the company.

An active member of the NAACP, Robinson spoke at many civil rights protests and rallies including the famed March on Washington in 1963. He also shared his opinions on social issues, sports, family and life for the New York Post and the New York Amsterdam News. He was often a featured speaker at civil rights rallies including the famed March on Washington in 1963 and frequently participated in picket lines and protests. As a nationally syndicated columnist for the Post and Amsterdam News, Robinson wrote passionately on social issues, sports, and family life.

Just 10 years after he was inducted into the Hall of Fame, Robinson died of a heart attack at his home in Stamford, Connecticut, on Oct. 24, 1972. Complications of heart disease and diabetes weakened the former shortstop in his final days and made him almost blind by middle age.

Robinson’s baseball life shines every season. Robinson’s jersey number, 42, is retired across the league except every April 15 when every single MLB player dons it to celebrate his life and the breaking of the MLB’s color barrier.

Additionally, the MLB and its television partner ESPN will run a series of events on April 15, including interviews of athletes and other well-known figures discussing Robinson’s legacy. Robinson’s wife, Rachel Robinson, who has continued her husband’s legacy through the Jackie Robinson Foundation, will also be featured.

ESPN also plans to broadcast a college baseball game between Stanford and Robinson’s alma mater UCLA  on April 15 at Jackie Robinson Stadium in Los Angeles. The effort will culminate on July 26 with the opening of The Jackie Robinson Museum in New York City. ESPN will broadcast its show First Take with live reports from the museum throughout the day.