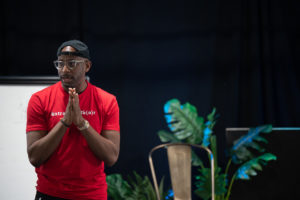 David Shands is one of the hardest working people you will meet. The podcaster, author, entrepreneur,  motivational speaker and one-on-one business coach has a simple motto: sleep is for suckers.

“The motto isn’t necessarily about sleeping, but watching tv, playing video games or spending all day on social media, we consider that sleep,” Shands told BLACK ENTERPRISE. “If you have the ability to accomplish something and you waste that talent, that god-given ability, we consider that sleep, you’re a sucker, so don’t ever get caught sleeping on yourself or your ability.”

Shands’ Youtube channel David Never Sleeps and his podcast Social Proof with co-host Donni Wiggins provides a world of insight and knowledge for entrepreneurs looking to expand their business and ideas. Social Proof is the #7 entrepreneurship `podcast in the country and #43 business podcasts among all podcasts.

“We introduce people who have social proof, who have built something and have a story to tell,” Shands said. “How did you accomplish the things that you’ve accomplished but another important part is the story behind the person. Because the how to is one thing but if you can get the story of somebody you realize the thing that many people used as an excuse, they used as a reason.”

Although Shands grew up in New Jersey, before moving to Georgia in high school, his story begins at a Cheesecake Factory Sands worked at for six year. Like many low-wage employees, Shands wasn’t happy working tables for tips but three years into the job, he received some sage advice from a co-worker that changed his entire experience the last three years he was there.

It was at that moment Shands realized the Cheesecake Factory was his top investor, and was providing the training opportunity of a lifetime. He spent the next three sharpening his speaking and customer service skills, while at the same time preparing for the day he left.

The biggest project for Shands’ is his Morning Meetup. From 8am to 9am eastern Monday through Friday hosts a one hour meeting for people trying to break into the entrepreneur world, looking to network with other entrepreneurs or trying to take their business to the next level.

“Monday through Friday I jump on a call and I’m coaching entrepreneurship all across the country to between 350 and 500 people,” Shands said. “We have a theme for the month such as financial literacy and every call will support that theme for the month. We also have a book club every day we read a chapter and the next day we discuss it. So far this year we’ve read seven books.”

Shands said he’s driven by constantly staying in the middle and making sure he has the right people around him to keep him motivated to work harder and do more.

“What motivates me most is always staying stuck in the middle,” Shands said. “I always have a mentor and always have a mentee. My mentor is someone that’s further ahead and not just money, they’ve accomplished some things, they have some game that I wish I had but don’t have right now, but I also keep a mentee or clients that I need to be an example for, so I can get the information from my mentor and give it to my mentees and that’s what keeps me sharp.”

Even when Shands is having fun, business and entrepreneurship is on his mind. The former waiter said Monopoly is his favorite game and he can spend hours playing with his friends and family. The one piece of advice Shands has for those who are trying to do anything outside of a nine to five position, but who are still working a nine to five, is to bridge the gap between your reality and your dreams.

“It’s how to create a bridge between your day job and your day dream,” Shands said. “Like there’s a job you go to everyday, but there’s this dream you think about all day at work. So how do we take that reality of the job you have and transition it into a dream, so that dream becomes a reality? That’s the first step”

Chris Nikic, first person with Down syndrome to complete Ironman triathlon, to receive Jimmy V Award for Perseverance at ESPYS

Former No Limit Rapper Paroled After 20 Years In Prison