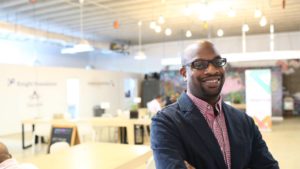 Brian Brackeen, founder and former CEO of Kairos, was fired by his company’s board of directors in 2018.

The successful entrepreneur raised $13 million for Kairos and garnered national attention for his groundbreaking facial recognition technology. But Brackeen’s refusal to sell his company’s technology to law enforcement may have led to allegations against him that eventually pushed him out of the company. A year later, the legal battle between Brackeen and the Kairos board ended in Brackeen’s favor.

Now, Brackeen is returning to Kairos as chair of the Scientific Advisory Board. All parties involved in the 2018 debacle have departed. Kairos’ new leadership team has voted to bring Brackeen back to the company to continue his mission and goals for Kairo.

“We are delighted to have Brian back at the company, now more than ever the world needs to address fairness and inclusiveness in AI and Kairos continues its mission with Brian on board to deliver bias-free face recognition software to the world,” said E Jay Saunders, Chairman of Kairos, in a statement. “We look forward to having his insights and working with Brian to grow the company worldwide.”

Brackeen is the brains behind Kairo. He worked as a senior project manager for Apple Inc. and senior managing consultant for IBM before launching his masterpiece.

Kairos is a human analytics company that uses facial recognition to help companies better interact with their stakeholders. It blends together social science and technology, allowing businesses to obtain data that impact consumer decision-making in real-time.

In 2016, Brackeen was the recipient of the Innovator of the Year award at the BLACK ENTERPRISE Tech Summit. During the event, he spoke about the team’s remarkable accomplishments.

“In the last 12 months, we processed 250 million faces. We’ve grown revenue 200% year over year and we’ve declined marketing spend on that time. Also, last quarter was our best quarter ever. Last month, was our best month ever. We just continue to trend upward and up. Kairos is Greek for the most opportune moment. We really believe that this is it.”

Nearly three years after his departure, Brackeen is returning to Kairos to bring his expertise in algorithmic bias. As chair of the Scientific Advisory Board, he will continue his work to address and eliminate racial bias from the technology.

“In my first action in this role, I’ve directed the company to focus on a new API— the “Bias API”, which will allow firms all over the world to detect and fix biases in their algorithms.” Says Brackeen. “We intend to do deals with the big players like AWS, Google Cloud, and others to expose our service in their clouds to their customers, as well. Kairos will cement its place as a leader in this space, right at the correct time. We have learned so much over the last nearly 10 years, it’s time to use that knowledge for good beyond Kairos’ walls.”

Brackeen’s Battle to Keep His Company

Brackeen’s disputes with his board raised questions about white investors and their treatment of Black founders.

Brackeen encountered a series of problems from the board and investors after refusing to sell his technology to law enforcement.

The Kairo board accused Brackeen of using company funds for unauthorized trips, meals, and expenses. Brackeen denied the allegations and filed a countersuit. In a letter to his investors, he shared that the board filed an exaggerated lawsuit against him to justify termination. He also believed they used it as leverage against him to force him to work for free.

Brackeen filed a lawsuit against the Kairos board.  It alleges that an investor pressured Brackeen to reconsider selling the company’s tech to law enforcement. It reveals that a “fundamental clash” ensued. This fueled the board and investors’ mission to “push Brackeen out of Kairos.”

In 2019, Brackeen and the Kairos board reached a settlement in court. The Company and Brackeen agreed to part ways. They also agreed that Brackeen would continue to be recognized as founder and remain a shareholder.

“Founders of color and women are under-invested in,” he shared. “We are either not getting great representation or we don’t have VC’s (venture capitalists) on our side. For those that are able to overcome that huge hurdle, they are then squeezed from the other side.”

There is a long way to go to achieve funding parity and remove racial bias from decisions. But Brackeen is using his voice and capital to level the playing field.

Carson Wentz injury: Where do Colts go from here if QB misses start of season? Plus impact for Eagles’ pick