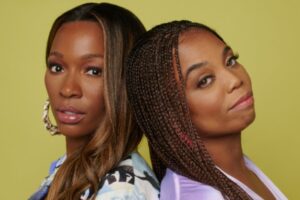 Former ESPN hosts Jemele Hill and Cari Champion are teaming up for a new weekly show on CNN.

On Thursday, CNN announced that Hill and Champion would co-host Cari & Jemele: Speak.Easy., on the network’s new subscription streaming service coming this spring. The two broadcast journalists will give their takes on the latest trending topics in sports, entertainment, politics, and culture.

With both co-hosts having strong backgrounds as on-air correspondents, Hill and Champion will combine their skills for CNN as they did for “Cari and Jemele (Won’t) Stick to Sports” on Vice TV.

“I’m so thrilled to join CNN+. The beauty and authenticity of my friendship with Jemele has always been at the heart of our creative partnership,” Champion said.

“I couldn’t be more excited to be part of the CNN family and share our brand of ‘speakeasy’ with the world.”

“I believe the old adage is that if you work with one of your best friends, then you’ll never work a day in your life. While I made that up, there’s a certain magic that happens when Cari and I collaborate together,” Hill said.

“The CNN family is a perfect partner for us because they understand our chemistry and appreciate that our boldness is our strength.”

The former ESPN hosts share a decorated history as sports broadcasters. Hill hosted SportsCenter for nearly 12 years as well as hosting His and Hers and writing for The Undefeated. Hill was suspended from ESPN in 2017 after posting anti-Trump statements on social media, including one calling the former President a “white supremacist,” Washington Post reports.

CNN has been busy acquiring standout talent for their new subscription-based platform. Last week, the outlet announced that former Atlanta Mayor Keisha Lance Bottoms (D) was hired as a contributor along with conservative pundit Jonah Goldberg.