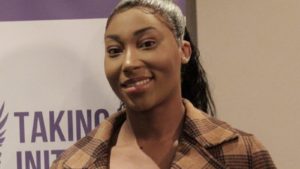 UK Black Lives Matter activist Sasha Johnson is fighting for her life after she was shot in the head over the weekend.

The Taking the Initiative party leader had been facing numerous death threats ahead of the violent attack in South London on Sunday morning, The Guardian reported. The 27-year-old was hit in the head by a single bullet around 3 a.m. No other injuries were reported. It is believed that the shooting occurred in an area where a house party was taking place nearby.

The TTIP released a Facebook statement confirming the accident had taken place after the activist became the target of “numerous death threats.”

“It is with great sadness that we inform you that our own Sasha Johnson has sustained a gunshot wound to her head,” the statement from ttip read. “She is currently hospitalised and in critical condition. The incident happened in the early hours of this morning, following numerous death threats.”

The Met Police released a statement saying there were no facts proving Johnson was the victim of a target attack. Detectives investigating the shooting think Johnson might have been shot by mistake and wasn’t the intended target, The Guardian reports.

In her party’s statement on the shooting, TTIP highlighted her social justice work within the Black Lives Matter movement.

“Sasha has always been actively fighting for black people and the injustices that surround the black community, as well as being both a member of BLM and a member of Taking the Initiative Party’s Executive Leadership Committee,” ttIp’s statement read. “Sasha is also a mother of 3 and a strong, powerful voice for our people and our community.”

Johnson rose to fame during the worldwide BLM protests in 2020 following the death of George Floyd. The Taking the Initiative Party has been hailed as the UK’s first Black-led political party, with Johnson serving as a standout figure within the movement.

Precious Lee on the cover of i-d magazine