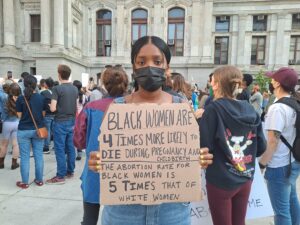 Across the South, tight restrictions on abortion have already put the procedure out of reach for many Black women, but Black organizations have emerged to fill the gaps.

Last week, a leaked draft of a Supreme Court opinion pointed to the end of abortion rights nationally during a time when other countries are expanding abortion rights. If that happens, it would leave millions of Black women—who seek abortion care at a higher rate than other women—with less access to healthcare services and leaving them in worse health, education, and economic situations.

“It might not be as many as it was in the ’70s because we have medication abortions. There are groups that are going to have access to those — whether legally or illegally. But everybody’s not going to be able to do that and women are going to die.”

If Roe v. Wade falls, which seems more than likely, many Black women in the South will be forced to turn to a network of Black female-led grassroots groups and organizations to fill gaps in healthcare. Many of these groups are already in action helping Black women and minorities put together funds, coordinate time away from work, childcare, and transportation to another state to get the procedure.

Laurie Bertram Roberts, the executive director of the Yellowhammer Fund, an Alabama-based nonprofit that offers support and funding to have abortions, has gone as far as bailing someone out of jail to get an abortion.

Roberts and other reproductive rights advocates say they’re not ready for the end of Roe v. Wade but are as prepared for it as they can be.

“We’ve been planning for this possibility for several years,” Roberts said. “This isn’t a new threat, but it’s a larger threat. So many states could lose abortion access at once. Like 2,300 to 3,000 people get abortions at the clinic in Jackson, Mississippi, a year. How do you reroute 3,000 people out of state?”

According to The New York Times, almost half of U.S. states risk losing abortion if Roe v. Wade is overturned, including 13 states which have “trigger laws” immediately banning abortion. Advocates and organizations across the South believe Black women will bear the brunt of abortion restrictions.

According to the National Network of Abortion Funds (NNAF), in 2020, abortion funds used more than $10 million to support more than 400,000 people.