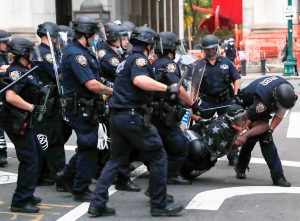 Black Lives Matter (BLM) leaders met with Biden administration officials and the group expressed disappointment in the administration’s effort in a police reform deal and proposals across the country to give more funding to police.

BLM leaders told CNBC in a statement it isn’t pleased with the administration’s efforts to enact police reform earlier this year. Most notably, police budgets across the U.S. are increasing including the LAPD and NYPD.

“Leaders from Black Lives Matter met with White House officials earlier this year to discuss our policy agenda, and while we appreciate the chance to talk with them, we are surprised by their lack of progress on issues that matter to Black people, the same communities that so strongly supported Biden-Harris during last year’s election,” the Black Lives Matter Global Network Foundation told CNBC Tuesday.

It’s unclear as to when this meeting took place or who was involved in the meeting. Politico reported in May BLM leaders have yet to meet with Biden officials.

U.S. lawmakers are still working on police reform, but Rep. Karen Bass (D-Calif.) told NBC News that negotiations have hit a wall due to infighting between law enforcement groups.

“I worry that it could prevent us from coming to a deal. And you know what I think it would be a really sad statement about the profession that they would actually prevent reforms and refuse to modernize,” Bass said.

BLM was created in the aftermath of George Zimmerman’s acquittal for the killing of Trayvon Martin. Last year’s killing of George Floyd kicked off a resurgence for the group and the movement in general as national and worldwide protests ran all summer and more than 100 large U.S. corporations made pledges of racial equity and diversity.

The latter has led Biden to announce states could take from the $350 billion in stimulus funds in order to help metro police departments deal with guns. However, that has upset BLM leaders who believe there are many other priorities the Biden administration can deal with.

“And now we see the President arguing for increased spending on police rather than investing in housing, education, climate preparedness and healthcare,” said Black Lives Matter’s statement to CNBC said. “This is no time to return to the dangerous days of the tough-on-crime fear-mongering of the 1990s when more cops were placed in our neighborhoods, rather than services that improve lives and keep Black communities safe.”