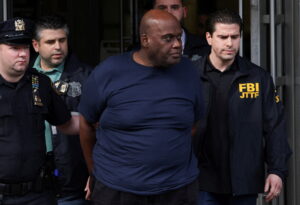 Defense attorneys for the alleged Brooklyn subway shooter claim that the FBI obtained DNA samples from the shooter improperly without contacting his counsel.

According to CNN, lawyers for alleged Brooklyn subway shooter Frank James filed papers claiming his constitutional rights were violated when FBI agents seized some DNA samples from him.

Federal public defender Mia Eisner-Grynberg said multiple oral swabs of James’ DNA were taken by FBI agents who went into his jail cell at the Metropolitan Detention Center in Brooklyn earlier this week on Tuesday, she claimed in a letter sent to US Magistrate Judge Roanne L. Mann.

The agents also questioned him and made the suspect sign several documents.

Although attorneys are typically informed of such matters in advance, Eisner-Grynberg wrote in the letter that neither she nor the other attorneys representing James had been informed ahead of time about the DNA samples taken by the FBI.

Eisner-Grynberg stated that she only found out about the action from James and had to ask the FBI for copies of what he signed. Attorneys had only received a copy of the search warrant after it was carried out.

“It is the standard practice in this District that when the government obtains a search warrant for buccal [oral] swabs from a represented, post-arraignment defendant, the government informs counsel of same before its execution, and offers an opportunity to be present.”

Federal prosecutors have defended the legality of the FBI’s getting the DNA samples from James. They stated in a court filing that the DNA samples were acquired through a judicially authorized search warrant.

“No violations of any of the defendant’s constitutional rights occurred in the execution of the warrant,” prosecutors wrote in the filing to Mann.

Earlier this month, James was arrested, suspected of setting off smoke bombs and firing shots inside a New York City subway car. The incident caused 23 people to be injured. He was arrested on a federal charge of violently attacking a mass transportation system, capping an around-the-clock manhunt.

A 10-page criminal complaint filed by federal prosecutors in U.S. District Court in Brooklyn charges James with a single count of committing a terrorist or other violent attack against a mass transportation system. If convicted, he could face life in prison, officials said.