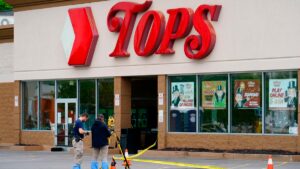 A 911 dispatcher has been placed on leave and could be fired after she hung up on a supermarket employee during the Buffalo shooting that killed 10 Black people.

NBC News reported that the Office of Erie County Executive said the dispatcher who took the call has been placed on administrative leave pending a disciplinary hearing set for May 30 where “termination will be sought.”

Latisha Rogers, an assistant manager at Tops Friendly Market, told the Buffalo News she called 911 and whispered to the dispatcher because she feared the shooter would hear, and in the hope that the dispatcher would realize the situation was serious. However, the dispatcher dismissed her with “a very nasty tone.”

“The dispatcher comes on and I’m whispering to her and I said, ‘Miss, please send help to 1275 Jefferson there is a shooter in the store,’” Rogers said.

“She proceeded in a very nasty tone and says, ‘I can’t hear you, why are you whispering? You don’t have to whisper, they can’t hear you,’ so I continued to whisper and I said, ‘Ma’am he’s still in the store, he’s still shooting! I’m scared for my life, please send help!’ Out of nervousness, my phone fell out of my hand, she said something I couldn’t make out, and then the phone hung up.”

The dispatcher, whose name has not been released, has been on the job for eight years. The call is unlikely to be released to the public as dispatch calls are only released in the state of New York through a court order.

The shooter, Payton Gendron, 18, was indicted by a grand jury Thursday and will remain in custody. Gendron has pleaded not guilty to the murder charges.

Authorities believe Gendron drove to Buffalo from his home in Conklin, New York, and targeted the supermarket in the majority Black neighborhood due to a hatred he harbored for minorities that was fueled by Internet-promoted conspiracy theories that white Americans are being replaced by Black Americans and other minorities.

Multiple local media outlets have reported that Gendron was questioned last year after he made a “generalized” threat at his high school. Gendron was given a mental health evaluation at the time but was released after a day and a half.

Investigators at multiple federal agencies are now examining evidence at the scene and online to piece together the scope and motivation behind the shooting. Federal prosecutors are also determining whether to charge Gengron with hate crimes, which could add significant years to any sentence he receives and could include the death penalty.

After the dispatcher hung up on her, Rogers called her boyfriend and directed him to call the police. After Rogers told local media of her experience, county officials began investigating, eventually locating the call in question and finding the actions of the dispatcher to be “completely unacceptable,” according to Erie County Executive Mark Poloncarz.