The unanimous decision was made recently among board members of the West Contra Costa Unified School District after considering a proposal from the school’s Parent Teacher Association for the school to be renamed in honor of Obama, whose name is synonymous with her support of education and children’s health programs, the San Francisco Chronicle reports.

“Naming this school after Michelle Obama is a sign of the school’s rebirth,” Stephanie Hernandez-Jarvis, the president of the board, said in a statement. “The parents and students advocated to rename their school after Michelle Obama because they believe the values our former First Lady embodies and the educational, child-centered causes she champions are representative of what we all aspire to nurture in our school communities. 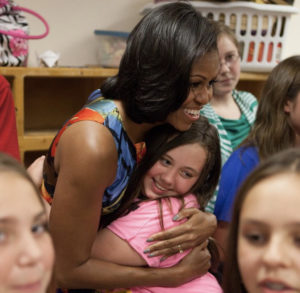 Obama was a huge advocate for education during her time in the White House and continues to advocate for students. President Barack Obama and the first lady launched the “Let Girls Learn” initiative in 2015 to raise awareness and ensure adolescent girls around the world are ensured the right to an education. There are several other initiatives led by Obama supporting post-secondary education, the necessity of school counselors, education for African Americans, and art education, to name a few according to theedadvocate.org.

The elementary school, which was formerly named after Woodrow Wilson, will be the second school in California to be named after Obama, the school district says, with the other in Panorama City in Southern California. The school is currently being hosted in a temporary campus in El Cerrito while its Richmond location at 42nd Street and Roosevelt Avenue is being developed into a new “state-of-the-art 21st facility,” according to the statement, the East Bay Times reports.