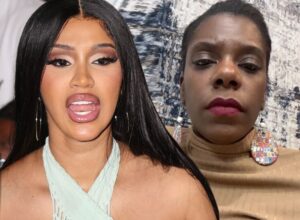 After Cardi B won a $4 million defamation lawsuit against YouTube personality Tasha K, the rapper now  wants a gag order placed on the blogger.

On Thursday, the Grammy-winning rapper asked a federal judge to permanently ban Tasha K from posting “harmful and disgusting lies” about her to the internet, Billboard reported. Cardi wants to impose a permanent injunction against Tasha where a court ruling would force the YouTuber to pull all defamatory claims about the rapper from the internet and ban her from reposting them.

“Plaintiff filed this action because defendants refused to stop targeting her with harmful and disgusting lies,” Cardi’s legal team wrote.

The filing comes after Cardi sued Tasha in 2019 for posting YouTube videos accusing the rapper of shocking allegations that she proved were false. Since winning the suit, Cardi says Tasha hasn’t removed all of the videos with the defamatory claims, Rolling Stone reports.

“Not all of the videos and posts containing the defamatory statements have been removed from defendants’ social media accounts,” Cardi’s filing reads.

The new brief accuses Tasha, whose legal name is Latasha Kebe, of posing a “constant ongoing threat” to Cardi even after she testified in January that she would not stop posting defamatory statements unless compelled by the court.

“Unless someone actually forces you to, you are never going to stop repeating these statements about my client?” one of Cardi’s lawyers asked Tasha in court, the new filing states.

“That is correct,” Kebe replied.

“So the only way at this point these videos are ever going to come down is if this court forces you to [remove them]. Is that right?” the lawyer pressed.

“That is correct,” Kebe replied.

“Are you essentially saying that to stop you from calling my client ‘Cold Sore B,’ my client needs to get a gag order?” the lawyer asked.

The filing also cites a tweet Tasha sent out on January 26 saying “No LIES were told on anyone.”

“Plaintiff is only seeking to require defendants to remove any videos and posts that contain the defamatory Statements from their social media accounts and to enjoin defendants from republishing those same statements,” the new filing concludes.