What does one who suffers from depression and has attempted suicide do for a career? If their name is Pauleanna Reid, they turn that pain into purpose. Reid is a successful journalist, celebrity ghostwriter, and millennial mentor, changing the game simply by having a giving heart and outworking everyone in her path. Her journey is one for the books. While Reid doesn’t have a college degree, she has been schooling women on the goal-getting game for years.

As the founder of New Girl on the Block (her mentorship program for millennial women dealing with major life and career transitions), a leading senior contributor for Forbes, and sought after keynote speaker, her rise to the top is on display for all to see. This amazing journey has not come without its sacrifices though, and Reid is a brilliant business woman who shares both the ups and the downs—a rarity in the filtered world of Instagram highlights.

Mentorship Built on a Solid Foundation

Growing up in a strict Caribbean-led household with a Trinidadian mother and Jamaican father, putting her best foot forward was the only option for Reid, whose giving spirit stems from childhood seeing family members active in her community.

“Mentorship is the greatest contribution that I can make with my life. I take that role very, very seriously.” To borrow the words of Queen Bey, Reid knew she was part of something way bigger. Having had mentors pour into her, she wanted to be able to pay it forward in a meaningful way.

In 2015 Reid founded her mentorship program New Girl on The Block, where she has helped more than 200 women, spanning 10 different countries “turn distant dreams into noteworthy achievements.” From sex workers to seven-figure earners, Reid’s mentee base is all-inclusive. Whether they’re going through a quarter life crisis, a corporate career transition, are a new graduate or an entrepreneur in need of guidance, Reid lends an ear, heart, and hand. She shares her experiences, teaches them about marketing and the art of pitching themselves, as well as helps her mentees to rework unsupportive narratives. Reid is on a mission to instill confidence while also providing those in her program with the tools that they need to achieve accelerated growth toward their goals.

Many though are confused about a mentor’s role. If you too have been unsure, Reid can clear it up for you. “Mentors are in your life to guide your steps. Mentors are in your life to edit your steps. Oftentimes people are scared and are stuck in analysis paralysis. They second guess themselves and do not know whether or not to put something into the world. So, mentors are really there to leverage their experiences, resources and networks.”

“Dropping out of school opened a lot of doors for me. I think many people lean heavily on traditional education and that’s totally fine, but for me, I made a decision to turn the world into my classroom.”

People have not always understood Reid’s decisions, which led to some tough sacrifices along her journey, losing the support of some friends and family members along the way. The millennial entrepreneur believes that we invest time in what’s most important to us. “As you add more to your plate, you have to subtract something else.”

Pre-COVID (remember those days?), the Toronto native was on a flight every other week. This resulted in her not being available to celebrate important events with loved ones. “That means I’m missing out on graduations and I’m missing out on birthday parties and weddings, because when you’re an entrepreneur, you only eat what you kill.”

At certain points even her parents weren’t on board with some decisions. She believes a lot of people are crippled by the idea of loved ones not supporting their dreams. “Your parents love you I’m sure, but I don’t believe they always know what’s best for you. Ask yourself that tough question, ‘Am I going to listen to my gut, or am I going to listen to someone else.?” The ability to reflect, understand her emotional triggers and hone in on what’s truly best for her is what has given Reid such an edge.

“A lot of times when people have criticism, it’s based off their own self-doubts, Their own fears, Their inability to take risks. And so, if that’s the case, you are not in a position to advise me of anything. If you have not been in the direction I’m heading, then you’re not qualified.”

Reid operates on very little sleep admitting that she has slept on couches and in airports to get it in where she can. While it is not a lifestyle she plans on maintaining long term, it’s short term sacrifices like this along with the many other unconventional decisions she often makes that are paying off (literally) for the 32-year-old. Reid is on the path to seven figures with her ghost writing agency, The WritersBlok. At The WritersBlok, she and her team help “the leaders and doers who are shaping the future turn their personal stories into brand assets.” Reid works with celebrities, professional athletes, CEOs, entrepreneurs, and busy executives on everything from penning book proposals, bios, and keynote speeches to helping pull together blog content.

This rise to the top didn’t happen by chance though. Reid made conscious, often uncomfortable and scary, decisions daily to get her to where she is today. She made consistent moves, even before the outside world thought she was ready. She showed up day in and day out. Before Reid had a website, she used an unpolished deck. And when her first website wasn’t up to par, she shared it anyway. Imperfect progress has been a big part of her journey.

Where You’ve Been Doesn’t Determine Where You Can Go

Reid went from struggling with reading and failing Grade 11 and 12 English to writing for Business Insider and becoming a Forbes senior contributor (an honor only about 50 of 2,000 writers received by the way). She went from two failed suicide attempts to living a full life of purpose. She went from being bullied to speaking on stages for thousands, from monster bosses to becoming a multiple six figure full-time entrepreneur. The lesson here? Where you’ve been does not determine where you can go.

“I wouldn’t change a damn thing. At the moment it seems like your life is over and you’re dying a slow death and everything is crumbling around you. But looking back, it’s made me who I am in the context of there’s a lot I’ve put myself through that I can bounce back from. I have an incredible amount of resilience.”

This is not the end for Reid. She plans on pulling back from being so hands-on with her ghostwriting agency through hiring a CEO in the future, which will allow her to spend even more time helping others build their lives up. She would ultimately love to do more work with the youth through schools and conduct even more guest lectures at colleges and universities.

“I love the idea of aiding people who are shaping the future and who are shifting culture … this is the gateway to my ultimate goal of living a simpler life. Heading into my late 30s, I would like to slow down. I’m very passionate about youth education, mental health advocacy, and anti-bullying so I want to do more work in schools. I do feel like a lot of the curriculums are outdated. I feel like we do our students and our next-gen leaders a disservice by not taking the time to give them the tools that they need in order to succeed in the next phase of their lives.”

With such a bright future ahead of her, and all the success and accolades, it’s easy to forget the abuse and trauma Reid has withstood. She believes that understanding her triggers along with speaking up and not living in crippling silence saved her.

“How I’ve climbed out of any hole I’ve been in is gradually. The recovery process for everybody looks different. For me the best thing I could’ve done for myself is raise my hand and talk to a medical professional. I actually did not take that step until I had my suicide attempt in 2008, Until I recovered from that—And that was way too late. I really want to encourage people to not wait that length of time, To not wait until you are faced with a life or death situation to talk to somebody about what you’re dealing with and what you’re going through.”

Reid is more than 10 years into her entrepreneurship journey having started her first company when she was just 21 years of age. “I’ve always played the long game. I’ve never wanted to rush the process. I don’t believe anything that comes easy is worth it anyway. I think that it’s really important to also understand that every artist, entertainer, business owner was once an amateur. I want people to focus less on scalability and focus more on perfecting their craft.”

Reid recommends studying the history of your industry and figuring out who are the best in the game, and learning from them. She also loves to encourage those sitting on the sidelines with a dream to start early, assuring that “you’ll never feel ready.” The New Girl On The Block founder finds that fear is a big stumbling block for many women she encounters.

“I do think successful people experience fear, but we don’t allow it to paralyze us. And how you can get over that is doing one thing a day that scares you. That has been my mantra for a very, very long time now. If you do one thing a day that scares you, you’ll then make discomfort feel normal. And so, when I have to stand in front of a stage in front of a thousand people, yes I’m afraid but because I’m so accustomed to doing things that scare me, by the time I have to climb that big hill, it’s a familiar feeling, and so I’m able to still do my job.”

Reid understands that the largest hurdle is a mental one. “It’s the conversations that we have with ourselves that determine if we win or lose and many are having losing conversations.”

Mentor Monday: Getting into Pauleanna’s Tribe

Outside of her mentorship program New Girl On The Block, Reid also has a Mentor Monday for those who follow her on Instagram @PauleannaReid, which consists of 15 minute consultation calls with women two Mondays out of the month. You can also follow her hashtag #ReidingList for the founder’s dope list of book recommendations. 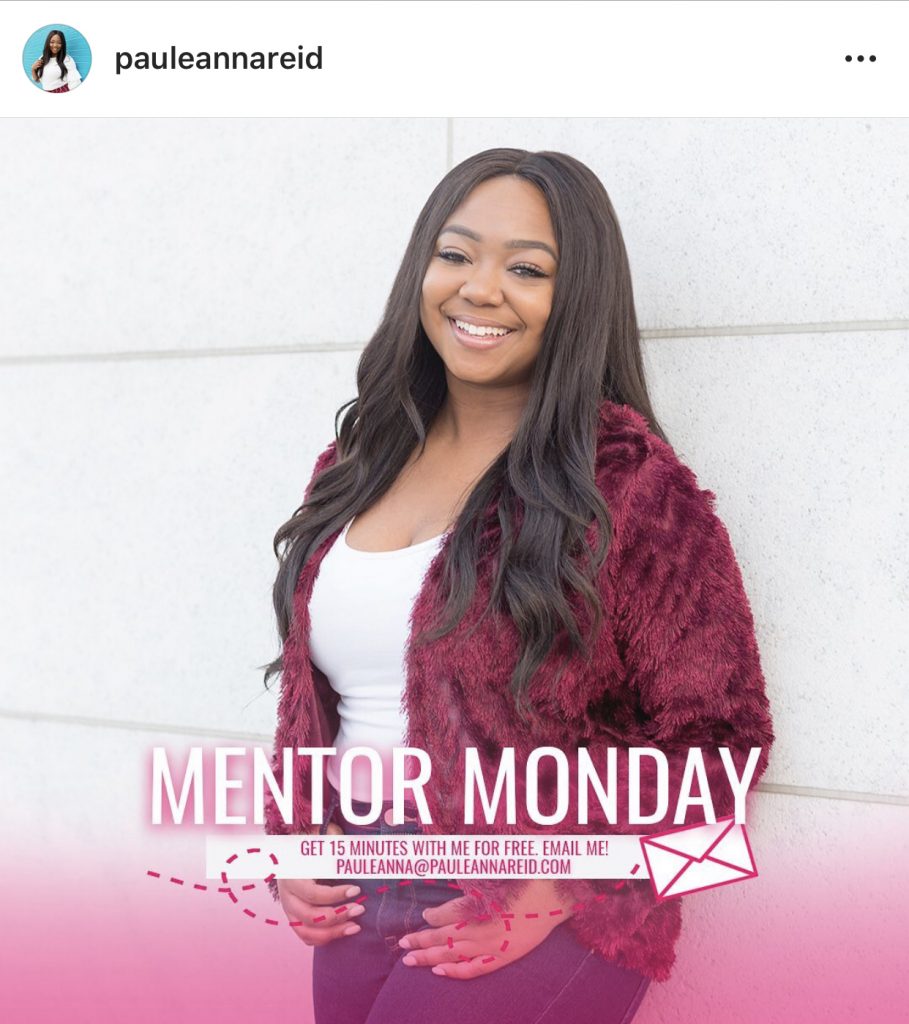