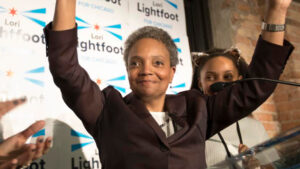 The mayor of Chicago is embroiled in a lawsuit that accuses her of making obscene remarks to attorneys.

According to WGN9, a lawsuit was filed last Tuesday against Chicago Mayor Lori Lightfoot for defamation. A former attorney for the City of Chicago claims that she allegedly berated a group of attorneys making lewd statements including, “I have the biggest d**k in Chicago,” during a heated discussion over the removal of the Christopher Columbus statue.

The statue was removed in July 2020 after protests over police killing victim George Floyd. City crews used a large crane to remove the statue in Grant Park under the direct order of Lightfoot a week after protesters trying to knock down the monument clashed with police officers.

In October, the attorney claims he worked with lawyers for the Joint Civic Committee of Italian Americans to negotiate the group’s desire to display the statue in its annual Columbus Day parade. Lightfoot had ordered the statue to be temporarily removed. The group intended to put the statue at the end of the lineup, leave it covered until the end, and then have it uncovered for 20 minutes.

The lawsuit alleges that Lightfoot used obscene language as she berated the attorneys.

“You make some kind of secret agreement with Italians, what you are doing, you are out there measuring your d— with the Italians seeing whose got the biggest d—, you are out there stroking your d—- over the Columbus statue, I am trying to keep Chicago Police officers from being shot and you are trying to get them shot. My d— is bigger than yours and the Italians, I have the biggest d— in Chicago.”

Fox 32 reports that Lightfoot released a statement earlier today regarding the lawsuit.

“I am aware of the lawsuit that has been filed by a former Chicago Park District employee. While I will continue my practice of not commenting on the specific claims alleged in pending litigation, I feel compelled to state that the deeply offensive and ridiculous claims are wholly lacking in merit, and I welcome the opportunity to prove that fact in court. Furthermore, to be clear, I never have and never will harbor any animus toward Italians or Italian Americans.”