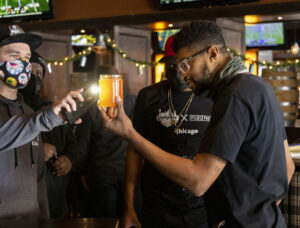 From revolutionizing breweries to epic festivals, Chicago’s craft beer movement has made its mark. This Black History Month, Chicago’s four Black-owned breweries are coming together for a very special collaboration.

This collaboration between the breweries has already given new life to a variety of beers, including a Chicago Uncommon Ale — which will debut Feb. 13 at 3 p.m. at a Super Bowl viewing party. Haymarket will also feature up to eight beers available from the four breweries.

For Mike Gemma, Haymarket’s director of operations, the need to support Black brewery owners is important, especially as an underrepresented group within the beer industry. The idea for the residency was born out of that need, and continues to shed light on the 0.4% of Black owners nationwide while while 93.5% are white.

“With Black History Month upon us, we thought about what stories do we want to tell, and this seemed like the perfect fit,” Gemma told The Chicago Tribune. “We’re excited about the surge of Black-owned breweries, and it’s been wonderful to meet (the owners) and hear their stories.”

Co-founder of Moor’s Brewing, Jahmal Johnson is no stranger to early success, having launched last Juneteenth. He acknowledges the impact of the residency—sharing and spreading the stories of Black brewery owners.

“Haymarket putting this program together gave us all the opportunity to bounce ideas off each other and get to know each other’s history and motivation,” he said.

Johnson continued: “Everyone has their own story and vision, and it reminds me of a revolutionary time. I’d compare it to when hip-hop started. Hip-hop in its purest form was just a cool thing to do, and it turned into this multibillion-dollar industry.”