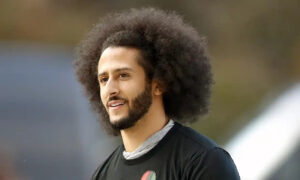 Last month, the owner of the Las Vegas Raiders went on record to say he’d welcome former Super Bowl quarterback Colin Kaepernick with “open arms” if his head coach and general manager were on board. According to ESPN, the NFL team owner kept his word, and Kaepernick worked out for the team Wednesday.

NBC Sports reported that Mark Davis, owner of the Las Vegas Raiders, said Kaepernick is deserving of every chance to become a quarterback in the league once again. Davis spoke in an interview as part of Race in America: A Candid Conversation in April.

“He deserves every chance in the world to become a quarterback in the National Football League. I still stand by it. If our coaches and general manager want to bring him in or want him to be the quarterback on this team, I would welcome him with open arms.”

On Wednesday, Kaepernick worked out for the Las Vegas Raiders. It was his first time interacting with an NFL team since May 2017, when he flew to Seattle to meet with the Seahawks to discuss playing with them. The Seahawks did not sign Kaepernick, and he has been out of the league ever since.

Although he completed a workout for the Las Vegas Raiders, Kaepernick would likely be a backup quarterback if he is invited to join the team. Derek Carr is already the starting quarterback for the Raiders. The team has two other quarterbacks on the roster: Jarrett Stidham and Nick Mullens.

Kaepernick, whose football skills were never in question, came close to winning the Super Bowl in 2013 when he led the San Francisco 49ers to the title game. The team lost a close game, 34-31, to the Baltimore Ravens.

Kaepernick, who was the starting quarterback in Super Bowl XLVII for the San Francisco 49ers in 2013, sparked the controversial #TakeAKnee movement after taking a knee during the national anthem to protest racial injustice in America. Eric Reid, Kaepernick’s teammate, also kneeled in solidarity to help bring awareness to racial injustice and police brutality against Blacks.