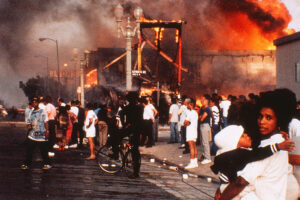 Political and religious leaders representing Black and Korean communities joined family members of Rodney King and Latasha Harlins today to urge unity and peace on the 30th anniversary of the Los Angeles riots.

Thirty years ago today, the four white police officers caught on video beating King with batons in one of the most blatant examples of police brutality were acquitted. That led to six days of rioting, looting, violence, and fires across Los Angeles. Harlins was 15 when she was fatally shot in 1991 by a Korean-born shopkeeper who owned a South LA liquor store.

More than 2,000 people sustained injuries and more than 12,000 were arrested. Estimates of the damage caused during the riots were between $800 million and $1.4 billion, according to Axios.

The even was held at the intersection of Florence and Normandie avenues, the epicenter of the unrest.

“Thirty years ago, the world changed, and so did I. The LA uprising crystallized my vision for what would later become Operation HOPE—a vessel dedicated to economic empowerment to all, especially those impacted by the destruction of that day,” Bryant said.

Connie Chung Joe, CEO of Asian Americans Advancing Justice-Los Angeles told reporters the anniversary “is a reminder of how racial injustice and anti-Blackness, particularly within our criminal justice and law enforcement systems, has persisted for decades in this country.”

The violent nature of King’s arrest followed by the acquittals of the four officers directly led to the ritos.

On March 3, 1992, King was driving with two passengers when the California Highway Patrol tried to stop him. King led them on a high-speed pursuit. The pursuit continued through residential neighborhoods of Lake View Terrace in San Fernando Valley before King stopped in front of the Hansen Dam recreation center.

After placing the passengers into a patrol car, the four officers, Stacey Koon, Laurence Powell, Timothy Wind, Theodore Briseno and Rolando Solano, surrounded King before tasering him and beating him with batons dozens of times while kicking him before handcuffing him and hogtying his legs.

Unbeknownst to King and the officers, the incident was being recorded by George Holliday, a local resident. The four officers were charged with assault and excessive force, but due to the media attention the recording of King’s beating received, the trial was moved from Los Angeles County to Ventura County.

The four officers were eventually acquitted of all charges by the jury, which did not have a single African-American on it. That led many to believe the trial was set up, increasing anger as dozens of residents walked to the courthouse to protest the decision.

Approximately 3,600 fires were set during the riots, destroying more than 1,000 buildings.