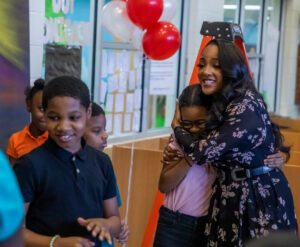 Guyton, the mother of a 1-year-old son, is passionate about keeping the children safe.

According to the Centers for Disease Control and Prevention data, road traffic crashes are the leading cause of death for children and young people between 5–29 years of age.

The new mother wanted to be a part of an ongoing effort that would help improve child safety, especially in school zones.

“Being a new mom, in a few years, [Grayson is] going to be going to school, and seeing the statistics of the injuries that children are having in school zones is extremely alarming. I’m glad we’re bringing awareness to that,” Guyton told She Knows.

She continued: “I’ve always prided myself on wanting to be a part of being a voice for the voiceless and the people that don’t necessarily have anybody protecting them. Children are the most vulnerable, and these children in underserved communities are that much more vulnerable. I love that 3M started here in North Nashville.”

The School Zone Safety Initiative has pledged its commitment to increase safety and visibility in 100 school zones in 23 countries worldwide by 2024, a press release confirmed. The remodeling includes the installation of reflective signs, visible street markings, and pedestrian crosswalks.

“3M’s commitment to improving school zone safety centers on the belief that every child deserves a chance at an education and getting to school safely shouldn’t be a barrier,” said Dr. Dan Chen, president of 3M Transportation Safety Division. “Over the next two years, we will work with NGOs and government agencies to improve safety in school zones and develop a scalable model for high-risk and under-resourced communities to create safer roads for all children.”

Nashville ranks 24th in traffic deaths per 100,000 residents on a national level, the Nashville Tennessean reported.

“I think the way we can turn this world around is prioritizing our underserved communities and lifting them up,” Guyton said, as per the outlet. “I think it’s our duty in Nashville to make sure we serve every community equally. Let’s serve them and make sure that they are taken care of.”