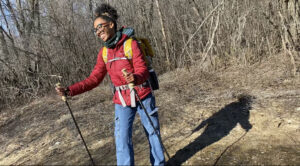 Zwena Gray, a young eager Detroit woman, is embarking on a hike-thru adventure of the Bruce Trail.

Upon completion, she will be the first Black woman to complete the 559 miles of the oldest and longest marked continuous Underground Railroad passage in Canada.

The Bruce Trail stretches 900 km from Niagara to Tobermory in southern Ontario. From about 1830 until the end of the American Civil War, escaped slaves journeyed across the Canada-U.S. border through the Underground Railroad, a secret route that led to freedom. Hikers can follow the Freedom Trail to the Black History Cairn, a memorial to the first Black settlers in the Owen Sound area.

Gray, along with a friend, is determined to spend six weeks walking in her ancestors’ footsteps for various reasons. One of her goals is to be an example of what Black joy looks like engulfed in nature. She wants to inspire people of color to spend more time outdoors.

“Being from Detroit, I really wanted to bring that connection to nature to my community,” Gray said, according to WDET. “It’s not only important for Black people to be present in these natural environments, but it’s also important for us to showcase just the freedom and liberation and just ease of existing and these spaces.”

An environmentalist, the 20-year-old grew up loving nature. She recently moved to Canada to study at Trent University, in Peterborough, Ontario, with a major in environmental studies and science and a minor in gender and social justice studies.

On her trek, Gray fuses her passions for nature and honoring the legacy of the escaped slaves who walked the same trails. Another goal for her journey is to learn from historians along the way and gain perspective about the communities that were created.

As she travels, Gray will create and post content to not only inspire others but to also spark her own creativity.

“I’m going to be making natural hair videos, do videos about how do you handle your period in the outdoors, and even doing fun stuff like tent talks every week for my Instagram and then I’ll also be having YouTube videos kind of more educational about the historians that I talked to and the areas that I go through — more of a day-to-day thing.”

Additionally, Gray plans to host events for BIPOC (Black Indigenous People if Color) communities, as per the Niagara Bruce Trail Club. Her intention is to encourage and educate participants about outdoor recreation.

“By experiencing nature in its truest form on the Bruce Trail, I want to share with people how there’s so much joy to be found in the outdoors and encourage them to care more for our planet and ultimately our wellbeing, Gray said, as per Black Like Us.