There is a long, unsettling history when it comes to the acceptance of Black people’s natural hair. In 2019, long before I became an editor for HelloBeautiful, I sat in my old organization’s common area with a sense of joy as I read the news that The CROWN Act was being passed in both California and New York. Jacob, my Caucasian colleague who I affectionately referred to as my work husband, looked at me and noticed that my energy shifted from lunchtime jokes to a face of excitement. “What’s happened?” he asked. “Can you believe it? A law was just passed to make hair discrimination illegal.” With an inquisitive look he questioned, “Hair discrimination? People discriminate against other people’s hair?” With a deep sigh and a sense of duty, I ran down various cases of hair discrimination against employees, and school children. Imagine living in a world where the hair the grew naturally from your head didn’t stand in the way of obtaining employment, going to school, or working in the military.

The CROWN Act, which stands for Create a Respectful and Open World for Natural Hair, was developed to put an end to natural hair discrimination. The law prohibits employers and school officials from race-based hair discrimination, which can result in the denial of employment or school opportunities because of their hair texture, and protective styles. 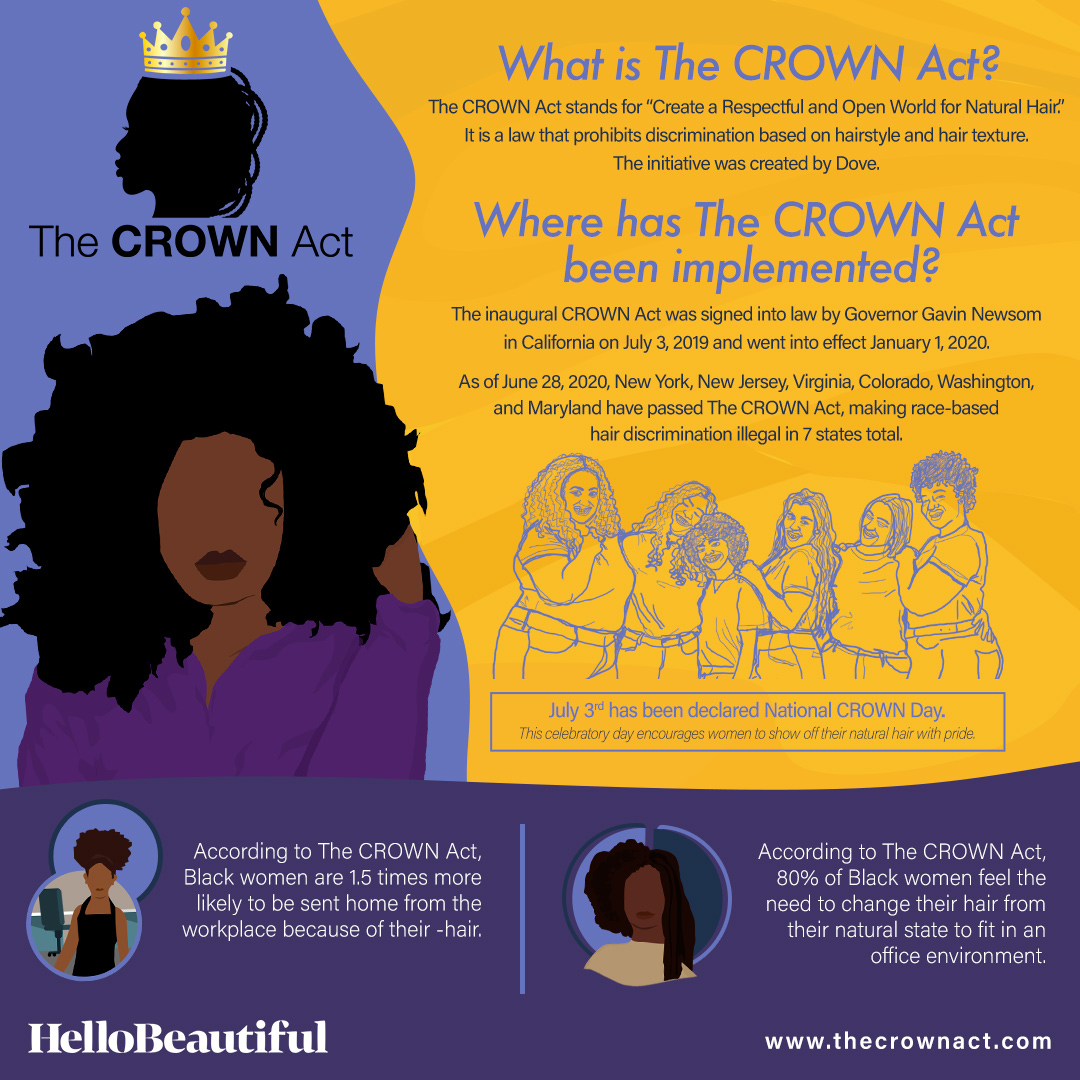 Impact Strategist Adjoa B. Asamoah has made a career out of mobilizing leaders and communities for social change and collective political action. In fact, she had an active role in introducing and passing The CROWN Act. “It’s wrong to discriminate against people based on their hair,” Asamoah said in an interview Blavity. “The way our hair grows out of our heads should not be seen as a violation. We have a long history and problematic practice of discrimination in this country, and we have to face it head on. The policing of our bodies is not something that’s new and Eurocentric beauty standards aren’t either. But they do require our attention.”

Over the last couple of years, there has been a large discussion around what type of hair is considered professional. As recent as 2017, the Army lifted their ban that prohibited soldiers to wear locs. The ban also allows for braids, twists, and cornrows, as long a they meet the standard hair dimension; a diameter no greater than a half-inch. This is a small win for people of color who wear natural hairstyles.

Hair discrimination affects us all, but it can have lasting repercussions on school-age kids. For many of us, the message that Black hair is suboptimal, distasteful, and unprofessional was taught to us both consciously and subconsciously. The mere fact that we are advocating to make natural hair equitable is proof that we were never supposed to love our texture. Over the last 10-15 years, women started to embrace the beauty of their natural curls. As Black women began to normalize braids, twist-outs, afros and cornrows, it sparked the question of whether these styles should be allowed in school and work settings. There was an influx of children being prohibited from participating in extracurricular activities in school until they cut their hair or removed their braids. Most were sent home from school and banned from returning until their hairstyles were changed. These authoritative actions teach children that their hair is problematic, and in order to be accepted, one must conform to society’s beauty standards.

Jacob had no idea that people of color were subjected to hair discrimination. Of course he didn’t. His natural hair never stood in the way of his education, or employment. He’s never had to straighten his hair for an interview because he was worried his kinks would limit him from employment opportunities. This kind of discrimination would never be a concern of his, unless he decided to dye his hair hot pink and shave a swastika on the side. That is a privilege most Black people will never know.

So far, California, New York, New Jersey, Virginia, Washington, Colorado, and Maryland are the first states to pass The CROWN Act. Other state lawmakers are actively working on enforcing anti-hair discrimination laws of their own. The progress has been slow but steady. In a perfect world, we would’ve evolved past the conversations that reduce Black people to subordinates. Fortunately for us, The CROWN Act is working overtime to hold America accountable for their sub-par standards.


Everything You Need To Know About The CROWN Act
was originally published on
hellobeautiful.com