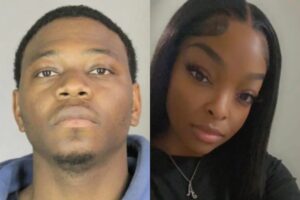 A Long Island man has been arrested and charged with fatally shooting a Northwell Health employee inside a parking garage underneath a medical office complex.

On Friday, Quay-Sean Renard Hines, 30, was charged with second-degree murder in the death of 33-year-old Amelia Laguerre, NY Post reports. Less than an hour after the shooting, Hines went to an LA Fitness in Levittown, Nassau County, police said.

Hines is believed to have hunted Laguerre down, intending to take her life. According to reports, he fired 10 shots at her in the dimly lit parking lot, nine of which hit Laguerre.

“This person was probably waiting in the wings. If you were down in that parking garage, it’s kind of dim lighting,” Police Capt. Stephen Fitzpatrick said during an April 1 press conference.

“He was probably lurking … and then just came out on her.”

Laguerre’s family says the single mother of a 5-year-old son told them that Hines was mentally and physically abusive toward the end of their two-year relationship. The former couple broke up sometime last year after he burned her clothes, damaged her property, and broke some of her child’s belongings during different domestic disputes.

Authorities believe Hines started stalking Laguerre after their breakup. He’s accused of breaking into her home in October 2021 and repeatedly showing up at her job to beg her to take him back.

Hines pleaded not guilty to the second-degree murder charges. He has been dating someone else despite claims of stalking his ex in hopes of getting her back.

“He does have other relationships,” Fitzpatrick said Saturday.