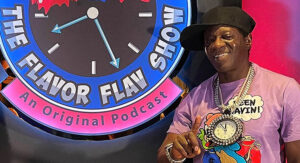 For a man known for wearing oversized clocks in public, his failure to timely file documents in a court case has caused a lawsuit he filed against a music producer to be dismissed.

According to Law & Crime, reality star and former hip-hop hypeman Flavor Flav has had a lawsuit dismissed because the former rapper “failed to timely file the required pretrial documents before the scheduledfinal pretrial conference.”

This is the second time William Drayton, better known as Flavor Flav, has failed to produce the documents requested.

The former Public Enemy member had ongoing legal battles with Gary Rinaldo, a producer of the famed hip-hop group, who uses the moniker Gary G-Wiz. The case against Gary G-Wiz was for an alleged breach of contract and copyright infringement.

The litigation started in 2017 when Flavor Flav filed a complaint against Rinaldo. The trial for that particular claim was originally scheduled for April 2019. The clock-wearing celebrity never met the court-imposed deadlines. Instead, Flavor Flav filed a motion requesting an amendment to his complaint well after the deadline for the amendment had passed—10 months prior. After the court denied the motion to amend, it issued an order to show cause as to why the former rapper’s lawsuit should not be dismissed for failure to prosecute the action.

Flavor Flav’s attorney attempted to file the missing documents with the court, but the court rejected it. In April 2019, his lawyer told the court that he had not filed the pretrial documents due to him being busy preparing for two other trials. He also stated that he expected Flavor Flav’s case to be settled. The district court proceeded to dismiss the action.

Earlier this week, the U.S. Court of Appeals for the Ninth Circuit affirmed the dismissal, finding that there had been no abuse of discretion with the court’s ruling.

In its ruling, the panel upheld the district court’s dismissal of Flavor Flav’s lawsuit for breach of contract and copyright infringement. In the decision, they found the former hype man “failed to timely file the required pretrial documents.” The panel pointed to the district court’s explanation that “Drayton’s expectation that the case would settle did not warrant disregarding the pretrial deadlines,” as well as the fact that Drayton’s failure to file the necessary papers “made it ‘impossible for the Court to manage its docket.’”