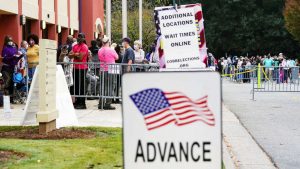 Florida’s Senate advanced a bill limiting voting by mail and drop boxes as part of a continued assault against American democracy.

The Republican Senate approved the bill in a largely party-line vote as one Republican joined all Democrats in voting against the bill following weeks of contentious debates. The bill would limit where drop boxes can be placed and requires those casting a ballot that way to show identification first.

Additionally, the bill makes changes including requiring voters to apply for mail-in ballots more frequently, restricting who can drop off a voter’s ballot at a drop box, and preventing anyone except official election workers from handing out food and water to those waiting in line to vote.

The push to change state election laws comes in the aftermath of former President Donald Trump’s election loss and his wildly debunked claims of election fraud.

Florida Democrats swiftly attacked their state counterparts for voting in favor of the bill.

“This bill is just a vindictive way of trying to punish people for an election that some people just didn’t like at the national level,” Democratic state Sen. Audrey Gibson said according to Yahoo News. “Not one indication of fraud, just a lot of folks decided that they were fed up and they wanted to vote.”

Gibson and other Black lawmakers in the state called the voting bill an extension of the Jim Crow South and discussed the hardships Black Americans faced and fought for so they could not only vote, but run for office.

“Just because you’re paranoid don’t mean they aren’t out to get you. When I look at this bill, I have to do it with an eye toward the history of Florida,” state Sen. Perry Thurston Jr. said according to NBC News, calling the measure “the modern-day version of voter suppression” in the state.

More than 70 Black business executives in America have called on large, national companies to push back against the voting bills being advanced by Republicans in at least 43 states. The campaign appears to be the first time a large number of powerful Black executives have organized to directly call out their peers for failing to stand up for racial justice.

Mary J. Bilge ‘My Life’ Documentary Shows Why She Will Forever Be Queen