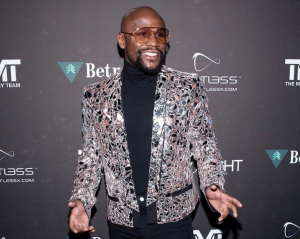 The recent death of George Floyd at the hands of law enforcement officials in Minneapolis has sparked public outcry and spurred a wave of protests around the country and world. Many celebrities were spotted out in their hometown joining in the protest, including Wale, J. Cole, and Michael B. Jordan. Now boxing champion Floyd Mayweather has come forward in support of the victim’s family and committed to helping them during this tragedy.

Hollywood Unlocked broke the news Monday that the professional boxer told with the publication’s founder CEO Jason Lee about his commitment to take care of all Floyd’s funeral expenses during a private conversation. Mayweather added that Anzel Jennings, CEO of his TMT music label, grew up with Floyd in Houston and that Jennings reached out to the Floyd family on Mayweather’s behalf. The family plans to hold three services in different locations, including Houston, Floyd’s hometown, Charlotte, and Minneapolis. “The family is also looking to have a fourth service in another location. Mayweather has also offered to take care of those expenses as well,” reports Hollywood Unlocked.

In the report, Mayweatherexpressed deep sadness over the recent string of deaths at the hands of law enforcement and is distraught about the minimal charges the officer responsible for Floyd’s death has received.