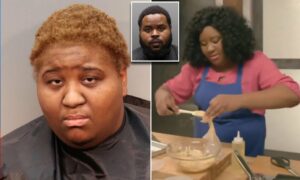 Ariel Robinson, the champion of Food Network’s Worst Cooks in America, was sentenced earlier this week to life in prison for the murder of her 3-year-old foster daughter, Victoria “Tori” Rose Smith.

Robinson took the witness stand last Thursday. She said Smith, her “mini-me,” was “the perfect child.”

Ariel Robinson enters the courtroom for Day 3 of her trial for homicide by child abuse. @foxcarolinanews pic.twitter.com/3QNggDurhx

“Oh, you’re cold. You’re cold. Girls that make themselves throw up deserve to be cold.”

Another church acquaintance testifies seeing an unclothed Tori with Ariel who told her “She shoves food in her mouth and makes herself throw up” and heard her tell Tori “Oh, you’re cold. Girls who make themselves throw up deserve to be cold.” @foxcarolinanews pic.twitter.com/BzKZjFVToH

When Jean Smith asked if the child was sick, Robinson responded that the foster child “eats too much and makes herself throw up.” Jean Smith added Robinson referred to the child’s eating habits as “a game.”

According to Fox News, Smith threw up on her dress on the way to church. The incident spiraled to the death of the foster child. Robinson’s husband, Jerry “Austin” Robinson, testified that his wife often became angry with Tori’s eating habits. He stated his wife would express her anger by beating the child with a wooden paddle or a belt. Robinson’s husband said he would try to help Tori avoid Robinson’s anger by eating some of her food.

Austin Robinson recalls his last conversation with Tori. He says he promised her this wouldn’t happen again. “She told me she loved me and I said I love you too.” @foxcarolinanews pic.twitter.com/tqVRoje7q9

Police found the 3-year-old beaten and unresponsive the day after witnesses saw the mother and daughter at church. According to Greenville County Chief Medical Examiner Dr. Michael Ward, her blood vessels had burst. According to Fox Carolina, prosecutors said Robinson severely beat the child with a belt, which caused her to suffer internal bleeding.

The case involving the Food Network contest winner sparked a petition on Change.org. The petition reads, “We want there to be frequent non-scheduled home visits to the foster and adoptive parents and even after adoptions are finalized.” It also calls for the law to “pass the bill to be named Victoria’s Law, which will call for reform of the current screening process to become not only an adoptive parent but as a foster parent as well.”

Robinson’s season is no longer available to stream on Food Network’s platforms.