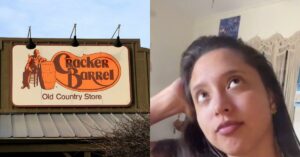 A former employee at a Cracker Barrel in Arizona took to social media to reveal that the restaurant she worked at used a code word amongst coworkers when referring to Black customers.

A user by the name of @cinnamnhoney posted on her Tik Tok account last week that there is a code word being used by white people to speak about Black people without being obvious about it. In the viral clip, she wrote, “a waitress used to complain SO MUCH if i sat “canadians” in her section & i was so confused bc i thought canadians were stereotyped as nice”

As the short video clip continues to play, it reveals that “canadian” was code word for black people.

According to Newsweek, Cracker Barrel released a written statement after getting wind of the Tik Tok entry. They stated that they were unaware of the video and that they “will be looking into the matter further.”

“We only recently learned about this video and have not had a chance to identify or speak with the relevant individuals. Obviously, racism has no place at Cracker Barrel and any actions like the ones described in the video would be against our policies, beliefs, and who we are as a company,” a Cracker Barrel spokesperson said.

Allegedly, this is not a new thing and has been used in this form for some time.

In 2008, an internal memo from the then-assistant district attorney Mike Trent of Harris County, Texas stated that Black jurors were seemingly referred to as “Canadians,” according to The Guardian. That memo was written in 2003 and emerged five years later as Trent praises a prosecutor in a particular case.