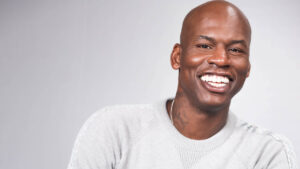 Being successful and continuing to make money after a career in sports isn’t always guaranteed if you’re not one of the top-earning athletes.

It’s been widely reported that 78% of professional athletes go broke within three years of retirement. This is why the NKSFB Sports Wealth Summit was created to guide athletes so they can avoid becoming a statistic when their career in sports is over.

After allowing other athletes to sit in on a conversation that was beneficial to those who attended, he will enlighten others in Miami this week.

BLACK ENTERPRISE spoke to Harrington about the benefits of attending this summit and how he was able to further make money after his basketball career.

After attending last year’s wealth summit in Aspen, what are your expectations for the Miami summit?

I think a lot of the younger guys are interested in their financial futures, so I feel like there will be more players than last year. I’m excited to see the different industries that show up this year. With everything happening in the crypto space and Miami being a big hub for it, I’m sure it’ll be a big topic of conversation.

You’re one of the athletes who has maintained a good financial portfolio, having several businesses you are involved in. Why do you think it’s difficult for many professional athletes to keep a healthy bank account after their sports career is over?

Young athletes aren’t always given the tools to be successful financially. For most of the guys, when they get into the league, it’s their first experience with real money, and a lot of times, they don’t have any idea how to invest properly. Either they manage their money themselves or have their managers/homeboys do it, and they don’t have the education either. That’s why things like NKSFB are so important.

How vital is this wealth summit in terms of educating athletes to help them invest their money in the right places and not fall into the trap of overspending, especially at the start of their careers?

It’s extremely vital. It should be mandatory for all new players that come into the league to attend the summit. I truly believe that it would help keep them from blowing their money and create real long-term wealth past the league.

How would this summit have helped you if this started when you first entered the NBA?

I probably would’ve saved a bit more money, but I hired a financial adviser early on who was pretty strict, so I didn’t do too much damage.

What suggestions would you give any athlete who hasn’t attended the wealth summit, and how would you persuade them to participate if given a chance to speak to them?

Do it! Basketball doesn’t last forever, and it’s important to set yourself up for a future beyond the game. There are so many opportunities and industries out there to learn about that can make you more money and wealth than you could ever make hooping.