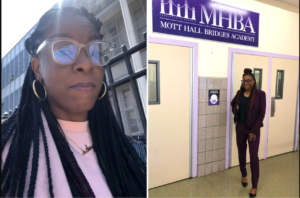 The principal who went viral for appearances on Humans of New York, The Ellen DeGeneres Show, and other media outlets has been banned from the grounds of the school she helped build. According to a new report from The New York Post, she makes some staff members uncomfortable.

Nadia Lopez went viral in 2016 after a student nominated her on the popular Humans of New York blog for her work as principal of Mott Hall Bridges Academy in Brownsville, Brooklyn.

Lopez was celebrated for her goal to raise funds to take students to visit elite universities like Harvard so that they can picture themselves on campus. After becoming acclaimed for her work, Lopez was able to take numerous trips to show her 6th-8th graders the colleges before she resigned in 2021, citing health issues.

However, Lopez continued to lecture, and while shooting an appearance in a documentary, she returned to the school with a former student to visit a teacher. The Post reports that despite a pleasant visit, District 23 Superintendent Miatheresa Pate and her deputy, Josephine Van-Ess, approached Lopez and asked her not to return to the school grounds.

The decision reportedly stems from a previous visit when Lopez wrote a follow-up email criticizing the school and staff after seeing former colleagues and students.

“It’s very clear that the current climate and culture does not represent the expectations I set for our scholars or the staff of our beloved school,” she wrote. ”Those currently appointed to the role of [Mott Hall Bridges] leadership by the DOE, have no idea what it means to be a part of something that was created to defy mediocrity and the status quo.”

That visit, along with sharing images of students on social media, prompted a complaint, and despite her popularity, Lopez has been asked not to return to the school where she was principal for 10 years.

Lopez is the author of The Bridge to Brilliance: How one principal in a tough community is inspiring the world, which depicts her career journey. She has also previously given a TEDTalk and was once invited to visit former President Barack Obama at The White House.

Despite the recent turn of events, Lopez says she remains “invested” in the success of her former school.