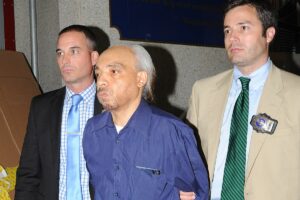 The member of a legendary hip-hop group is going to prison.

“Mr. Jolly’s death was devastating to his family and those who knew him,” Bragg Jr. said in a statement, where he thanked his colleagues for their help. “Every life we lose to violent crime ripples throughout our entire city, and we will continue to ensure everyone in our borough can live their lives with the sense of safety and security they deserve. This case makes clear that if you commit violent crime, we will hold you accountable.”

John Jolly was stabbed twice in the chest with a steak knife in midtown Manhattan in August 2017.

Prosecutors said Kidd Creole, now 61, stabbed Jolly twice because he thought that the homeless man was gay and making a pass at him. Glover’s attorney claimed self-defense.

Glover has been in prison for five years and was facing up to 25 years in prison when he was sentenced. Kidd Creole initially rejected an offer to plead guilty to manslaughter for a 10-year sentence before the trial started.

Grandmaster Flash and The Furious Five was formed in the late 1970s in the Bronx, earning worldwide success after recording one of the most well-known songs in hip-hop history, “The Message,” in 1982. The group was inducted into the Rock and Roll Hall of Fame in 2007, the first hip-hop group to receive that honor.