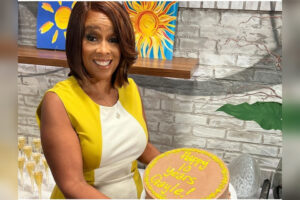 After a reported bidding war between broadcast and cable networks, Gayle King has decided to remain at CBS, where she will continue to anchor CBS This Morning and helm a new streaming show.

According to the New York Post, King made the announcement on Friday during her Sirius XM show, though she did not indicate how long her new contract will remain valid.

Her current deal with the network started in January 2012 and was set to expire in April of this year, which had drawn the attention of several other stations. Among them was CNN, which hoped to offer King the timeslot left vacant by Chris Cuomo‘s firing last month.

An inside source also allegedly told Page Six that MSNBC “could possibly put in a huge bid to have Gayle take over Rachel Maddow’s vacant nightly slot.”

But even before confirming that she had renewed her deal with CBS, where she makes a reported $12 million a year, King was very vocal about how happy she was with the network.

“After all this time, I still love this job,” she said earlier this month while celebrating her tenth anniversary on air. “I think it’s an awesome, awesome job. It’s a privilege, and I don’t take it lightly. I love being here with you guys.”

King’s new contract will also find her hosting CBS Reports, a series of documentaries and special reports which Variety says is one of two CBS News programs being revived for the network’s new streaming platform, CBS News Steaming Network. The new network will showcase not just the work of its national anchors, but also feature news reports from affiliates in major markets around the country.

King’s new show will kick off with a new special investigation and deep dive into the death of Trayvon Martin, set to premiere on Feb. 25.