This article is made possible through Votebeat, a nonpartisan reporting project covering local election integrity and voting access. This article is available for reprint under the terms of Votebeat’s republishing policy.

As analysts continue to debate the still emerging exit polls and voter data that will ultimately tell the story of the 2020 election, many agree Black voters in Georgia were crucial to Biden’s narrow November victory. It is also commonly understood that Black voters will be critical to Georgia’s high profile Senate runoff races, and organizers are hoping to continue to grow their numbers.

Along with most of the country, Georgia saw record-breaking turnout in the November election from all demographics, including those with traditionally low voter participation. For Black voters, organizers on the ground like Dennette Battle have had an enormous impact on increasing turnout in their communities.

“Because with the efforts of a lot of grassroots organizations, which we can give a lot of them credit, not just our organization, but many organizations came out and actively promoted voter participation,” Battle said.

If November’s Election Day was any indication, the more than 1 million absentee ballots requested in Georgia’s Senate runoff races could bode well for Democrats.https://t.co/NJp6qemgaD

Battle was stationed at South DeKalb Mall on the first day of early voting for the January runoff election, wearing a Black Voters Matter mask. She was there to do civic outreach on behalf of her Delta Sigma Theta sorority alumni chapter, offering voters at South DeKalb Mall a free meal.

Battle has been volunteering throughout the 2020 election cycle and says it is because of groups like hers that Georgia saw record turnout.

Georgia voters will play a pivotal role in deciding control of the U.S. Senate on Jan. 5. Republican incumbent Senators David Perdue and Kelly Loeffler are trying to fend off challenges from their Democratic rivals Jon Ossoff – and the pastor of Ebenezer Baptist Church in Atlanta, Raphael Warnock.

Black women have been responsible for much of the recent Democratic organizing in Georgia. Nationally, the group has earned the title “the backbone of the Democratic party,” said the former co-chair of Vice President-elect Kamala Harris’ presidential bid.

But the Biden campaign made a specific effort to reach out to Black men, too, as did many grassroots organizations like the national Black Male Voter Project, led by Mondale Robinson.

Despite these record-high numbers, there has been some debate over the size of black men’s contribution in the general election. Analysis from the New York Times and others suggests that Black voters fell as a relative share of the electorate.

Nse Ufot, CEO of the New Georgia Project, said this can be attributed to inaccurate polling and data. In part because, although Georgia requests voters identify a race for registration, some do not want to share their race or do not identify with any of the options, and that can skew racial analyses. It is also due in part to preconceived notions that Black men do not vote, Ufot said.

When Georgia’s Republican Sen. Kelly Loeffler isn’t complaining about the outcome of the 2020 election, she’s putting all her energy into approving negative ads about her opponent, Rev. Raphael Warnock. #SenateRunoffshttps://t.co/SudcK3IzeE

“A lot of it amounts to what I would call hand-wringing about whether or not Black men are going to show up, and the truth is that we saw elevated participation from black male voters during this election cycle,” Ufot said.

Emory University political scientist Andra Gillespie says the voter data used by the Times is not publicly available. She says it is possible that, while all demographics increased voter participation, it did not increase among Black voters as much as others.

Exit polling available from November suggests Black voters made up 29% of the electorate, but they make up 30% of registered voters, according to Gillespie. She says this could mean there’s an opportunity for growth heading into the runoffs.

“So even though we’ve got growing Asian American and Latinx voters, and even though we have a non-trivial number of white voters who voted Democratic in the presidential election, if you don’t have strong turnout among African Americans, Democrats can’t win,” Gillespie said.

That is very clear to Ossoff, who said Democrats have to prioritize the needs of Black voters. He has made reaching out to African Americans a top priority of his campaign.

“It’s really the extraordinary turnout of Black voters and the determination and the grit that Black voters have demonstrated in the face of voter suppression that ensured Biden’s victory in Georgia,” Ossoff said.

A new poll shows an outsized number of Black women voters in Georgia are prepared to do their part in the upcoming runoff elections expected to shape the next U.S. Senate. #SenateRunoffshttps://t.co/O2IMsT3yCg

Black voters have come to realize the influence they have, said Robert Patton, who was voting Monday at South DeKalb Mall.

“I believe we are a major contributor to the Democratic Party. As you can see, our community contributed a great deal to the presidential election, and I think we will have a great deal to say about the senate races as well,” Patton said.

Still, some Black voters do feel that they’re undervalued. Imani Bennett is a Democratic organizer and student at Spelman College. She said sometimes there is a lot of pressure on Black voters during an election, without the policies to follow through.

“There’s just something about that it doesn’t really sit with me very well, because it’s like, we’re kind of tokenized and it’s like, once they get our vote, have they continued to keep our interest in mind in office?” Bennet said.

But even so, said Bennett, she and her peers are determined to keep the energy up through the runoffs.

A similar sentiment was echoed by Jeffrey Porter, a healthcare worker who was there to cast his vote at South DeKalb Mall on the first day of early voting.

“If you don’t activate your citizenship and your right to vote, you might as well shut up and keep it moving, cause ain’t nothing going to change unless you step up to the plate and swing,” Porter said.

So far, Black voters have made up 31% of early voters in the Senate runoffs, according to Georgiavotes.com using data from the secretary of state’s office.

Will Mail-In Ballots Unlock A Win For Democrats In Georgia’s Runoff Race? 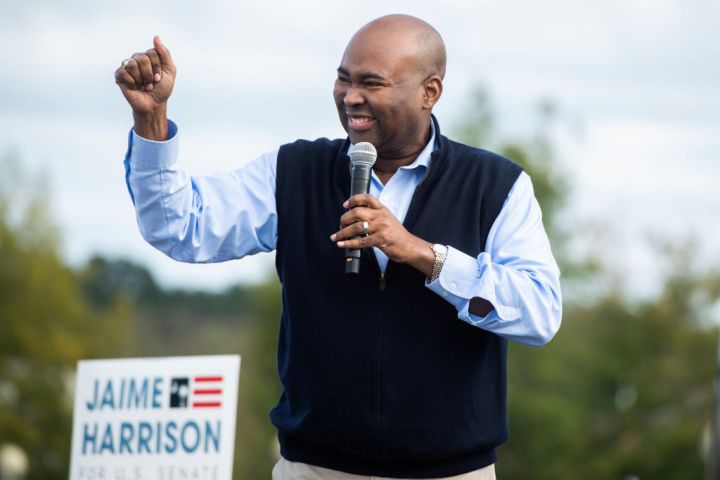 My thoughts on the GOP COVID-19 response.

It boils down to this: the team that got us into this mess, can’t get us out of it.

They lied to us. And THAT is an unforgivable sin.

If you are angry over the seating of Amy Coney Barrett to the Supreme Court, today would be a good day to help unseat one of the men responsible for putting her there 8 days before our election, Mitch McConnell.

My team asked me 20 questions.

I think you’ll enjoy them! pic.twitter.com/IGaJDMwxdb

.@CoriBush, a registered nurse and BLM activist, is the Democratic candidate for Congress to represent Missouri’s 1st congressional district. In “The Next Wave,” she talks about her support for Medicare for all, her experience with Covid-19 and more https://t.co/tka9C4slPa pic.twitter.com/iSCii0U0Xy

First @LindseyGrahamSC said that Black folks can do anything in SC… as long as they’re conservative.

Now he says young women can have a place in America if they’re pro-life and come from “traditional families.”

Any other requirements we should know about, Lindsey? pic.twitter.com/mYnluXCONd