Richard Appiah Akoto, a teacher from Ghana, garnered international praise for instructing his students on how to use Microsoft Word in a very unusual way—without utilizing a computer. Two years ago, images of him drawing screenshots of Microsoft Word on a blackboard in great detail went viral.

Teaching Word in this matter is, of course, tedious, but thanks to his innovative approach his students were able to fully learn how to use the software program. Eventually, Akoto’s method caught the attention of Microsoft, which then decided to help provide financial and technical support to the school, according to BlackBusiness.com.

“I wanted to teach them how to [use] Microsoft Word. But I had no computer to show them. I had to do my best,” he says. “So, I decided to draw what the screen looks like on the blackboard with chalk.” Akoto also said he had drawn monitors, system units, and keyboards.

Akoto has taught for about eight years at Betenase Municipal Assembly Junior High in Sekyedomase, Ghana. In 2018, he decided to post photos of his Microsoft Word sketches on Facebook.

Microsoft was so impressed with Akoto’s work that it invited him to participate at the 2018 Microsoft Educator Exchange in Singapore. It was the first time outside of Ghana for Akoto, who met education leaders from around the globe and shared his issues with the educational system in Ghana. 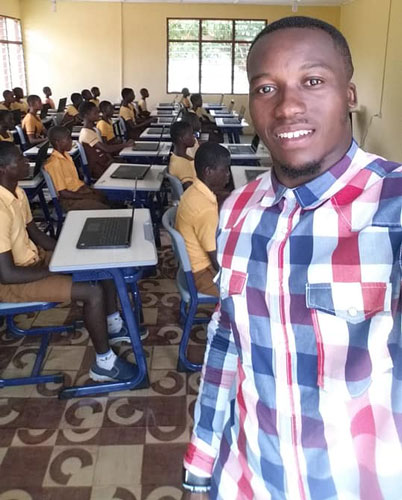 “I’d never travelled outside of Ghana, so the opportunity to interact with educators just like me from other parts of the world was incredibly inspiring,” he told Microsoft. “It was great to see how educators are using technology to teach their students beyond just the curriculum of their country. I was also inspired to learn how educators who experienced the same issues I did in terms of not having direct access to technology, overcame those challenges.”

Once Akoto went back to Ghana, the school had received a variety of donations of laptops, textbooks, and software from Microsoft. In addition, Microsoft donated an IT laboratory where the students can use actual computers to do their work. Akoto also participated in the Microsoft Certified Educator Programme, helping him to continue his passion for teaching.

Kelly Price Speaks Out After Being Reported Missing: ‘I Am Not In Danger’