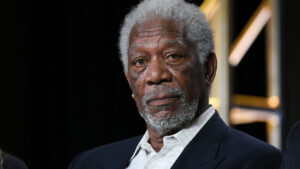 Russia, an enemy of the United States of America for several years, has released a current list of banned Americans.

It may surprise you who is on this list. As you can imagine, current President Joe Biden is banned. Former President Donald Trump, who is not listed, is welcomed in Russia, which comes as no surprise. But, a Black man who played the role of God and a United States president is also banned?

“In the context of responding to the constantly imposed anti-Russian sanctions by the United States and in connection with incoming requests about the personal composition of our national “stop list,” the Russian Foreign Ministry publishes a list of American citizens who are permanently banned from entering the Russian Federation.

“We emphasize that the hostile actions taken by Washington, which boomerang against the United States itself, will continue to receive a proper rebuff. Russian counter-sanctions are forced and aimed at forcing the ruling American regime, which is trying to impose a neo-colonial “rules-based world order” on the rest of the world, to change its behavior, recognizing new geopolitical realities.

“Russia does not seek confrontation and is open to honest, mutually respectful dialogue, separating the American people, who are always respected by us, from the US authorities, who incite Russophobia, and those who serve them. It is these people who are included in the Russian “black list.”

You may wonder why Freeman, who is only involved in politics when he plays a president in movies, appears on the banned list. It all ties into this statement that Freeman recorded on video: “We have been attacked. We are at war.”

The New York Post has reported that Freeman was listed on the banned list as “a well-known film actor who in September 2017 recorded a video message accusing Russia of conspiring against the United States and calling for a fight against our country.”

The Russians were referring to a Committee to Investigate Russia Video on YouTube. Freeman accused Russian President Vladimir Putin of secretly using “cyber warfare to attack democracies around the world,” especially his “sworn enemy, the United States.”

So, due to that 2-minute video clip, Freeman is among the 963 people no longer welcomed in Russia.