A local Black school administrator has been hospitalized twice following a week of racist incidents aimed at her.

“I’ve never experienced anything like that,” Dr. Versher told The OBSERVER on Thursday morning. She was taken back to the hospital later in the day.

Dr. Versher says she suffered three seizures on Wednesday, the first within 30 minutes of leaving a meeting with members of the school’s Black Student Union. They’d gathered to discuss how to move forward and heal after the discovery that someone had marked up a wall near her assigned parking spot with the n-word. Staff was alerted around 4:00 p.m. on Monday that the wall facing the soccer field had been defaced, but it was seen as early as last Saturday.

The words, written five different times, have since been removed, but the pain they’ve evoked for Dr. Versher and Black students at West Campus remains. It was the stress of hearing her beloved students commiserating with her that proved too much for Dr. Versher.

“They were traumatized, sad, angry, and I think what is most hurtful is that they, especially the seniors, expressed feeling immune to this type of racism, because they’ve experienced it,” she said.

She’s also had to have some hard conversations with her own eight-year-old daughter in recent days.  “She saw the news. She knows what the n-word is, because I don’t believe as a Black woman, you should shield your Black children from knowing what the history of this country is,” Dr. Versher shared.

“What she cried to me about was ‘Well, Mommy, why did they see you as the n-word?’ She sees me as the greatest person she knows.”

‘You Better Soldier Up’

When it was first announced that she’d earned the vice principal spot at West Campus, Dr. Versher says a fellow Black woman posted online, “Sistah, you better soldier up,” referring to issues there. Others act as if nothing is wrong.

“West Campus is literally a Utopian bubble, as far as staff and parents, and other students’ perceptions of the school,” Dr. Versher said.  “It’s a great school academically, but they’re under the impression that things just don’t happen at West Campus.”

These recent incidents are believed to be tied to a female student being suspended for wearing a crop top against dress code policy.  There have also been threats made against Dr. Versher on social media, which reportedly include the posting of her home address. According to a letter sent to parents on Tuesday, there were also threatening emails made directly to her family.

Additionally, Dr. Versher says two adults, believed to be siblings of a friend of the punished student, came to campus last Friday and made in-person threats. Threats that were taken seriously, with the district beefing up security on campus, SacPD sending out a CSI team and making visits to Dr. Versher’s home. The incidents may be considered as hate crimes.

The FBI Sacramento Field Office offered the following statement, “We are aware of the incident at West Campus High School and are in regular contact with local authorities. If, in the course of a local investigation, information comes to light of a potential federal violation, the FBI is prepared to investigate.”

“Hate crimes have a devastating impact on our communities by striking fear in those who live there,” Ragan wrote. “These crimes hurt everyone in the community. We cannot let these acts continue any longer. We must not let hate win.”

Dr. Versher is quick to squash simply labelling the wall defacement as graffiti.

“We have to call it out. This is hate speech,” she said. “This is not graffiti. To reduce it to graffiti makes it seem trivial.”

This isn’t about a dress code either, she maintains. “It’s about race and racism and White privilege and the fact that students have been allowed to be empowered in very disrespectful ways since I’ve been there,” she said of her three years at the high-performing school.

“The dress code was just a coded effort to use racism and target me.”

Where I Need To Be 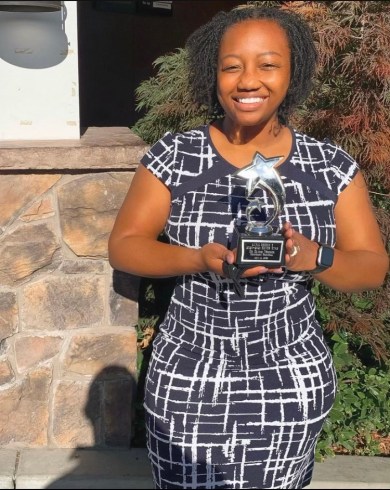 Dr. Elysse Versher is standing her ground after being the focus of a racially motivated attack at West Campus High School, where she serves as vice principal. Dr. Versher says non-Black students and parents have been empowered to disrespect her and her authority.

Although traumatized, Dr. Versher says she won’t be intimidated and chased off like local Black school leaders have been at other area campuses. “I’m not going to allow racism to run me out of where I know I need to be.”

“They’re looking at me and I know that this is a turning point in their own lives. How I respond, how I act, how I react, is going to be a lesson for them,” she said.

For many, Dr. V, as they affectionately refer to her, has been the only Black educator they’ve had in their whole K-12 school experience.

“If I fail in my reaction, what other example will they have?,” she said, fighting tears.

The Greater Sacramento NAACP and Voice of the Youth leader Berry Accius have both contacted her to let her know she’s not alone.

“We cannot continue to cover up a culture that has a long history of inflicting hate violence on African American students and teachers in the school system,” said local president Betty Williams. “We the NAACP Greater Sacramento Branch hope that the district will take these threats seriously and will act in a manner that creates a safe and engaging environment for all staff and students.”

Dr. Versher was familiar with Accius from his efforts to bring resolution to a similar incident of hate speech at Kit Carson International Academy in June when a Spanish teacher at the middle school was caught on tape using the n-word.

“It was really important to have that Black male response from him to say, ‘We are going to protect you and your students,’ “Dr. Versher shared.

The NAACP outlines recent incidents at the school, including students not being disciplined for renaming fellow classmates as the n-word on Zoom meetings, adults threatening to lay in wait for Dr. Versher in the school parking lot and students referring to her as, “black ni**er, black b**ch, black Hitler.”

While hate is at the root of the issue, lack of on-campus representation also plays a part. “There are no Black teachers. Not one Black counselor,” Dr. Versher shared. “The only Black representation students get, as for a credentialed person, is myself. Aside from myself, the community of care for Black students would consist of our attendance clerk, our plant manager and a handful of dynamic Black women in the cafeteria.”

Male and female student athletes are also under the guidance of an all-Black basketball coaching staff.

The school’s BSU, which Dr. Versher previously led, now has a White adviser. The adviser relays the Black students’ feelings and experiences to other White staffers. Feelings that Dr. Versher says had, until now, largely “fallen on deaf ears.”

“That person has reported and shared to staff how listening to their meetings has impacted her and how she feels there needs to be more urgency with staff to know the experience of Black students.”

Despite Principal John McMeekin’s assertion that such racially motivated behavior “has no place at West Campus,” Dr. Versher said little has been done to make that statement anything other than lip service.

As assistant principal, she’s investigated incidents where students have used the n-word and has handed out discipline. White parents figured out it was Dr. Versher who administered the punishment.

“They banded together and demanded several meetings to negotiate consequences, and they were successful in those efforts. They go directly to the principal,” she explains. “They essentially say, ‘We don’t have to deal with Dr. Versher, we do not have to adhere to her consequence, we will go to Principal McMeekin.’ He’ll undermine the consequence and parents and students get to walk away with no accountability.”

Her colleagues, in general, she says, support her leadership. “They’ve been that way since day one. I think the challenge that this incident spoke to them was that this is not a ‘one off.’ I think when I share some trauma I’ve experienced as it relates to race at the school with staff, they consider those to be isolated incidents.”

But, literally the writing is on the wall.

“I think it broke down that bubble that, OK, now we’re really seeing that because we did not step in to help Elysse, that we didn’t step in to reinforce that we have her back publicly, it gave consent for students and parents to believe that they can say and do whatever without recourse.”

During her time at the local high school, Dr. Versher said she’s been “very intentional with having conversations about race.”

“The aftermath of the murder of George Floyd was a culture shock and it forced staff to really be more inclusive, but it was still like a ‘one off.’ It was like, ‘We’re OK, we’re gonna have this one conversation. Check the box. All right, we talked about it.’ ”

Talk is cheap, Dr. Versher says. “I’m trying to be nice, but I’m so tired. I just feel like the conversations have been happening and people chose to not listen,” she said. “At the end of the day, what will change West Campus is justice.”

Justice she says is finding out who wrote the n-word five times in front of her parking spot. She’s also confident that with the attention the SacPD has given the social media threats, the culprits will be found.

“I trust SacPD,” Dr. Versher said. “I know that’s a hard thing for a Black person to say, that I trust the police, but I can say the police at SacPD have been urgent about this. They’ve gone above and beyond in my opinion, coming to my home, to make sure I’m safe, to build relationships with my kids and to let them know they’re safe.”

A rally in support of Dr. Versher and Black West Campus students is scheduled to be held outside the school on Tuesday, November 16. The gathering is set to begin at 3:07 p.m., following dismissal. Participants are urged to adhere to COVID-19 safety measures.