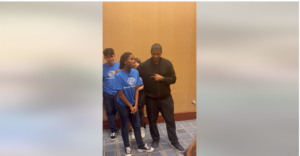 Academy Award-winner Denzel Washington has long said that he is extremely proud of his lifelong relationship with the Boys & Girls Club.

On Friday, Washington spoke to staff and members at the national conference of the organization where he gave a speech on gratitude for the clubs—specifically for how they rallied for families during the coronavirus pandemic.

He also joined in a sing-along of “Stand By Me” by Ben E. King with a young member of the B&G club.

The video of the sing-along was shared on Facebook and shows the young people and staff singing the celebrated anthem. At the end of the video, Washington says,

“I promise to always stand by you. I promise you, I’ll always be there.”

“All of you have proven that you need and deserve to be at the table when the issues facing our children must be addressed,” Washington said in his speech. “Because when essential workers needed essential services for their children, you stepped up to provide those services.”

Washington told CBS News in 2018, “I’ve been a member since I was 5. I worked there as a counselor: a day camp counselor, a sleep-away camp counselor. I’ve had every job you could have there, and now, for 25 years, I believe, I’ve been a national spokesperson. It’s made me happier because it’s something I can talk about from the heart and it’s something I mean. I can share the experiences I’ve had growing up in the club.”

Washington told Fox 32 Chicago that, “One of the great things about growing up in the club, it was the environment that was conducive for positive feedback and we thrived on that, we believed it. It was nourishing.”

Sports Illustrated wrote that the 67-year-old actor ran into several players at his hotel room.

“Your influence, your power, your wisdom, your ability to touch people—because everybody’s watching. Everybody’s got a favorite guy…you know that they’re watching, and they’re following,” Washington said. “And especially for the young boys: Listen to your elders, lead quietly—and win.”