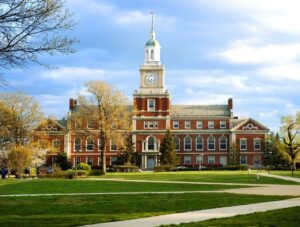 Howard University’s commencement convocation on Saturday could be the last for President Dr. Wayne A.I. Frederick, and many want his replacement to be a Black woman.

The commencement ceremony will mark the end of a contentious academic year for Howard students, faculty, and Frederick, as his leadership has been criticized. The academic year saw a well-publicized protest of the school’s outdated and unsafe student housing, a strike by the university’s hospital nurses and an agreement between Howard administrators and the union that represents faculty members after a three-year fight that nearly resulted in a strike.

Since Federick announced his retirement in April, beginning a two-year transition in presidential leadership, an increasing number of alumni have called for a more streamlined selection process and for the university’s next president to be a Black woman.

According to the Washington Informer, Fred Outten, a Howard alum, is currently engaging other graduates concerning the issue, pointing out that many Black women with various professional and academic backgrounds fit the qualifications. However, he stopped short of naming any women.

“We want to galvanize alumni to see to it that a Black woman becomes the 18th president of our beloved mecca,” Outten, a 1999 HU graduate, told the Informer. “We’ve seen a lot of activities on campus that weren’t in the best interest of students, faculty, and staff,” he said. “It’s been going on for 25 years. We wanted to put in a different perspective and see some new energy.”

The only female to serve as president at Howard was Joyce Ladner, a civil rights activist and sociologist who served as interim president in 1994 but was replaced in1995 by H. Patrick Swygert. Over the last decade, several HBCU schools have named Black women as presidents.

Outten said since launching his campaign, dozens of Howard alumni have gotten on board with the idea of a Black female president. Howard Alumni United member Fahima Seck has suggested Dr. Julianne Malveaux, the former president of Bennett College for Women and the current dean of Cal State’s School of Ethnic Studies.